Rabat - Moroccan international footballer Sofiane Boufal was awarded the Marc-Vivien Foé RFI/France 24 Award on Friday as the best African footballer playing in Ligue 1 for the 2015-2016 season. 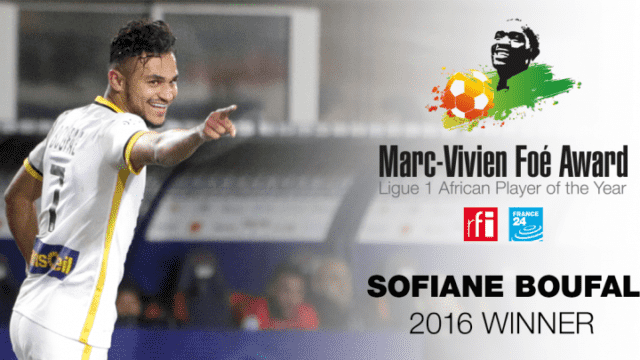 Rabat – Moroccan international footballer Sofiane Boufal was awarded the Marc-Vivien Foé RFI/France 24 Award on Friday as the best African footballer playing in Ligue 1 for the 2015-2016 season.

Last May, Boufal was nominated to receive the award’s trophy in Paris but, at that time, he could not accept due to a knee injury. He was then traded to the English club of Southampton.

Speaking to France 24, the offensive midfielder, said, “It is with great pride that I receive this trophy, especially as the prize list before me is well supplied with great players,” Boufal said. “This trophy is significant because it is my first big trophy – it will have a special place with me.”

Boufal beat out Senegalese Sheik Ndoye and the Algerian Rachid Ghazzal by achieving a successful year and a half with France’s Lille, during which he scored 11 goals.

Boufal is the third Moroccan player to be awarded this prize, following in the footsteps of Marouane Chamakh in 2009 and Younès Belhanda in 2012.

Boufal also expressed his readiness for the upcoming Moroccan national team’s participation in the 2017 African Cup of Nations (CAN), scheduled to take place this January in Gabon.

“I am looking forward to it because it will be my first African Cup. My ambition is to win the CAN,” Boufal said.