Last week, the Social Democratic Party announced that it had nominated Sevil shadier, a 52-year-old Muslim woman, who had she been elected, would have been the country’s first Muslim and first female leader.

Shhaideh was nominated as the SDP’s party leader, Liviu Dragnea, was not eligible for the role due to his April conviction for electoral fraud, for which he was handed a two-year suspended sentence.

The rejection from Romania’s president is a surprising one as this is the first time a nomination has been refused.

“I have properly analyzed the arguments for and against and I have decided not to accept this proposal,” Lohannis stated on television regarding the nomination.

Some say the refusal is due to her lack of political experience and, possibly, her Syrian husband’s background. Others worry her close friendship with PSD leader Dragnea might result in Dragnea holding too much power.

Following the nomination, Dragnea had told reporters that “If appointed, she would be prime minister, but the political responsibility stays with me first of all.”

In response to Lohannis’ refusal, PSD leader Dragnea has stated that the party may move towards impeaching Lohannis for the decision. 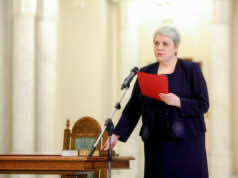