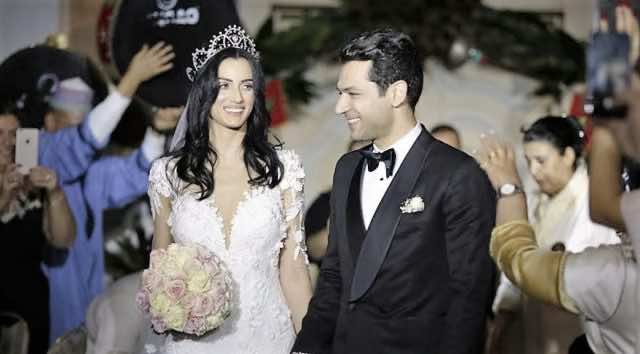 The various clips from the wedding circulated online and showed that the celebration was mostly a Moroccan one: Moroccan music and Moroccan clothing. El-Bani is seen wearing a caftan and Yildrim a jabador. Morocco’s ‘Deqqa Merrakshiya’ music also plays in the background.

In the clip below, Turkish television show  “Söylemezsem Olmaz” plays video footage of the wedding and judges it for being ‘too Moroccan.’ Turkish actor Murat Yildrim was thus criticized for somewhat denying his Turkish roots in the wedding preparations.

Last month, Murat was lucky enough to have Turkish President Tayyib Erdogan request permission from El-Bani’s father, on Yildrim’s behalf, for her hand in marriage.

Imane, who was crowned Miss Morocco in both 2006 and 2009 and finished as the first runner up in 2009’s Miss Arab World, met Murat in London, where they both currently live.