Social media users have found the genuine display of shared gratitude toward security forces who devoted their energies to ensuring a high level of security of during the New Year Eve’s festivities, enchanting enough to share and re-share, expressing their admiration for the warm relationship displayed between the Moroccans authorities and the citizens they were protecting.

The photos symbolize the trust that Moroccan authorities inspire in Moroccans, who have no problem in publicly demonstrating the appreciation they feel for the officers who have recently scored numerous successes in foiling terrorist attempts to destabilize the country. 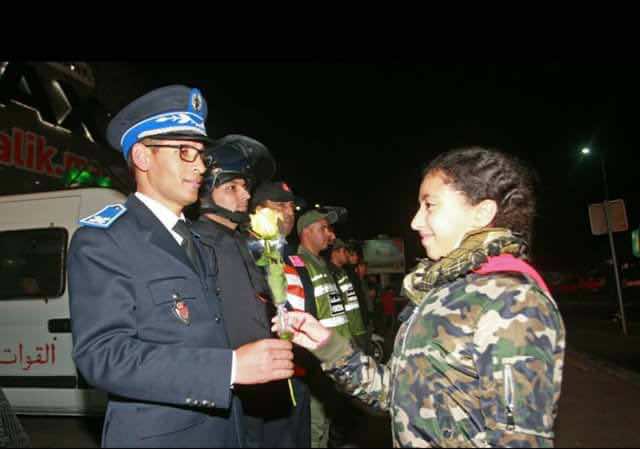 To guarantee the security of citizens and visitors alike, Morocco’s General Directorate of National Security effectively prepared Morocco’s defenses in the lead up to the New Year’s Eve festivities.

During the celebrations, the DGSN’s units stepped up their efforts and tightened their surveillance of borders and tourist sites by deploying additional units and supplying them with professional-grade logistical equipment.

The DGSN deployed 50,000 officers to facilitate Morocco’s alertness during the celebrations. Inn Casablanca alone 3,400 Officers had been deployed across the city.