In an excerpt from a Turkish television show, “Söylemezsem Olmaz,” the anchor appears angry at Yildirim for not valuing his Turkish culture during the wedding celebration and urged the bride to “wear a [Turkish] silk outfit.”

The anchor continued, lambasting Morocco and politicizing the issue, saying “Why you are showing me Moroccan culture from the morning to the evening? A country [Morocco] that was not even accepted by the African Union, Africa does not want to accept it. A country we don’t  know how it entered [the territory] of the Western Sahara.”

“I receive many insults from Moroccans – I don’t even know their language,” she continued, “I simply need to see a Turkish wedding in my own country.”

The anchor kept lashing out at Moroccans and criticizing the wedding. “I don’t like the wedding at all,” she said.

“[Oh Moroccans] go away from my account, do not insult me in Arabic,” she added.

While the show was being broadcast, some Moroccans commented, denouncing the racism of the anchor. “Comments are saying that this racist behavior,” one of the colleagues of the anchor said. “No, it is not related to racism,” the anchor answered.

The wedding of the couple has caused an uproar in Turkey. Last week, on the same show, the wedding was judged for being “too Moroccan.” Yildrim was, therefore, criticized for somewhat for representing his Turkish traditions in the wedding.

During the wedding, which took place in December at the CVK hotel in Istanbul, the married couple wore traditional Moroccan wedding outfits, including the Moroccan caftan and the ‘Jabador.’

Various clips of the wedding, which took social media platforms by storm, showed the guests dancing to the rhythms of Morocco’s “Deqqa Merrakchiya,” a popular Moroccan folk music from Marrakech. 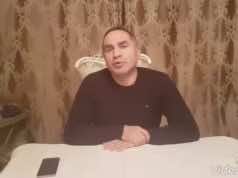 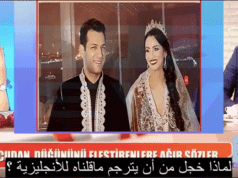 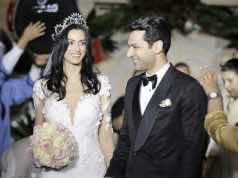