Casablanca — 15 Moroccan restaurants have been named by La Liste’s 2017 compilation of the world’s 1,000 best restaurants.

Casablanca — 15 Moroccan restaurants have been named by La Liste’s 2017 compilation of the world’s 1,000 best restaurants.

With a score of 96.75, La Grande Table Française (Marrakech) found itself in the Top 100. Other top rated Moroccan restaurants included in the prestigious list are Riad Kenza (Marrakech), Dar Roumana (Fes) and La Ville Blanche (Agadir), among others.

This year, for the first time, La Liste decided to also include more than 10,000 “Best Value” restaurants. The Moroccan restaurants below were included in that list:

In its 2017 research, La Liste has found that the leading trio this year is made up of Japan, France and China (Hong Kong and Macao), according to a press release published by the company. Marrakech’s “Le Salama” Restaurant Under Fire for Turning Away Moroccans 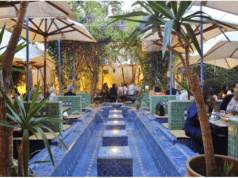 The 12 Best Places to Eat and Lounge in Rabat-Casablanca