Marrakech – On Monday, in the city of Marrakech, King Mohammed VI announced the launch of several projects aimed at preserving the historical heritage of the old medina of Marrakech and reinforcing its tourist and international character. 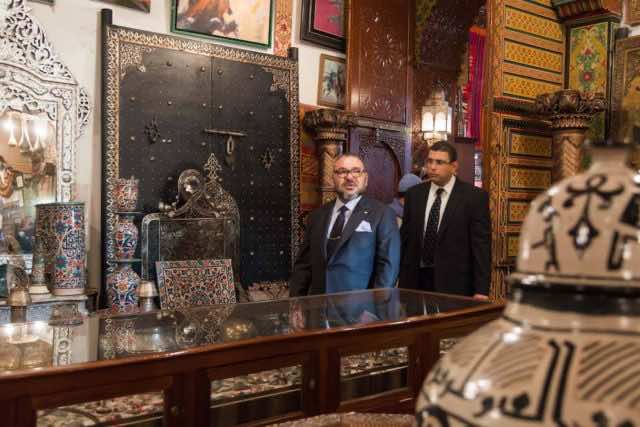 Marrakech – On Monday, in the city of Marrakech, King Mohammed VI announced the launch of several projects aimed at preserving the historical heritage of the old medina of Marrakech and reinforcing its tourist and international character.

Thus was launched an important program of restoration and enhancement of the tourist and spiritual circuits of the ancient medina of Marrakech.  Also included in the program is the Merstan urban health center project, which involves the reconstruction of the first aid centers of the Moroccan Red Crescent in the Jamaâ El Fna and El Mellah districts. The restoration of the Ben Youssef Medersa will also be included in this program.

In line with the objectives of the Development Plan titled “Marrakech, City of Permanent Renaissance,” these projects reflect the special interest granted by the Sovereign to the preservation and enhancement of the historical heritage of several cities in the Kingdom and His firm determination to safeguard different strata of the national memory.

They also testify to the will of King Mohammed VI to highlight the intangible, spiritual, cultural and architectural characteristics of the city of Marrakech to help consolidate its place as the City-Museum which has made it the flagship tourist destination of Morocco.  It is also hoped that the initiative will result in a boost in the living conditions of its inhabitants.

The old medina of Marrakech will witness the completion of several other projects aimed at improving the conditions of the population’s access to basic services and preserving the heritage of the ancient medina.

Thanks to these efforts, the Ben Youssef Medersa, an architectural gem built in the heart of the old medina near the Ben Youssef Mosque, will be restored. This particular project, which will be carried out with a budget of 61million dh, testifies to the will of HM the King, Commander of the faithful, to preserve the cultural and historical significance of Morocco’s ancient cities.

The King also visited the site of the renovation and conversion of former the Dar El Bacha into  the Museum of Confluences. The 12million dh project will be endowed with an exhibition space dedicated to the art of Islam which will exhibit writings, tablets and various objects related to science and Islamic knowledge.

It will also include a permanent exhibition space reserved to the universal collection of Patty Cadby Birch, representing the four continents of America, Africa, Europe, Asia. The collection includes historical and archaeological data demonstrating the different facets of Moroccan culture.  There ill also be dedicated for housing temporary exhibitions.

All of these projects come in addition to the many actions and initiatives undertaken by the Sovereign for the protection and promotion of the old medina of Marrakech, particularly the urban rehabilitation program of Hay El Mellah, the requalification project of the tourist circuit of “Ben Youssef” square towards “Jamaâ El Fna” Square through to “Ben Saleh” Square, and the rehabilitation of the Selhem, Ziyat and Sidi Abdelaziz Foundouks.