Morocco World News
Home News Morocco Moroccan Preacher: There is No Difference Between Burqa and Miniskirt

Rabat - Following the latest decision by the Ministry of Interior to prohibit the sale and production of burqa in Morocco, Sheikh Mohamed Fizazi has gone public, comparing the burqa to fashion fads like torn jeans and miniskirts.

Rabat – Following the latest decision by the Ministry of Interior to prohibit the sale and production of burqa in Morocco, Sheikh Mohamed Fizazi has gone public, comparing the burqa to fashion fads like torn jeans and miniskirts.

In a Facebook post, Fizazi expresses his point of view, saying, “Let me clearly ask and answer. Did the Ministry prohibit the hijab that is mentioned in the holy Quran? Sunnah and the Imams reached a consensus on it without arguing or prohibiting the burqa.”

For Fizazi, the burqa is a cultural symbol belonging to other countries like “Afghanistan, Pakistan and the Arabian Peninsula,” worn to obscure the female form.

“Here in Morocco and in the North of Africa in general, our women have their own style in wearing the hijab. It is a style that represents our social and religious culture,” he added.

The Sheikh goes on to suggest that if the government had proposed banning either the Moroccan or the Eastern veil, then it would be a clear case of an unfair ruling.  “Then we could say, ‘Oh God, this is unfair,” he said.

Since, however, the ban involves an item culturally appropriate to other countries, he reasons that it is not a decision which represents an infringement on Moroccan rights and freedoms.  In fact, he argues, the importation of products like the burqa represents a sort of betrayal of Moroccan culture and tradition.

Fizazi concludes his observations saying: “For me, there is no difference between the Afghan burqa and foolishly ripped jeans or a mini skirt, or whatever degrades our pure culture and particular our identity, while confirming that the discrepancy [between burqa, ripped Jeans, and miniskirt] should not be discussed from a perspective of degradation.” 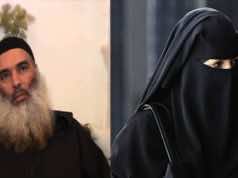 Moroccan Salafist Defies Burqa Ban by Giving it Away For Free

Burqa Ban in Morocco: A Debate Between Security and Freedom