Rabat - The driver of an Agadir bus, which caught fire Saturday, January 7th, in Amskroud has been referred to the investigating judge for the Court of Public Prosecution in Agadir. 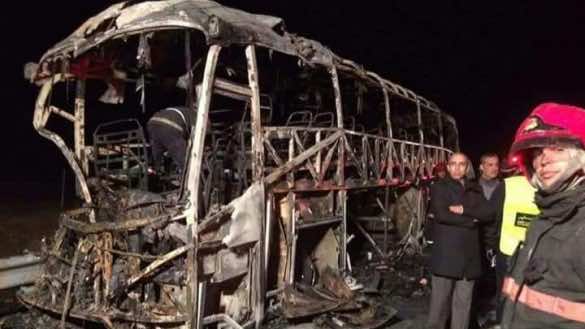 Rabat – The driver of an Agadir bus, which caught fire Saturday, January 7th, in Amskroud has been referred to the investigating judge for the Court of Public Prosecution in Agadir.

The referral follows a communiqué issued by the court, stating that “the driver has used his cell phone a total of 54 times while he was driving.”

It has been discovered that during the early morning hours between 12am-2:12am, the period of time in which the accident occurred, he had used his mobile an astounding 14 times while driving the bus.

The court’s statement went on to explain that “the referral is part of the investigation of the driver for not taking the necessary precautions during the trip and causing a traffic accident, resulting in the deaths of passengers.

11 people burned to death and 22 others were injured when the bus caught fire after colliding with a truck on the highway, just 41km outside of Agadir. The bus was bound for Tafrouat.

King Mohammed VI visited the bedside of one of the injured Saturday at the Mohammed VI University Hospital Center in Marrakech. The King decided to pay the funeral expenses for all the victims, in addition to health care costs for the wounded.