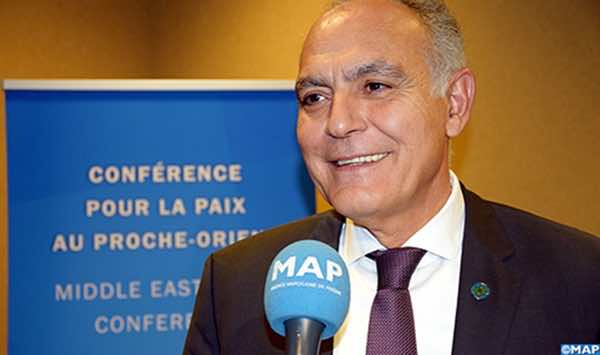 “Morocco has from the beginning supported the French initiative which was the only one on the table,” Mezouar told MAP on the sidelines of his participation in the international conference for peace in the Middle East, held in Paris, adding that after the failure of the negotiations in April 2014, there was a vacuum that was seized by Israel to pursue its policy of colonization and continue to repress the Palestinian people.

The Paris conference comes at an important moment, especially after the adoption by the UN Security Council of a resolution condemning Israeli colonization, he said, noting that the presence of more than 70 countries in this meeting is a strong message from the international community, testifying to its commitment to resolving this long-standing dispute.

He also warned against the current situation which cannot last and which could lead to an explosion in the region. “Time is ripe to establish a sincere dialogue for the solution of two states living side by side in peace,” he said, calling for compliance with the commitments made within the framework of UN resolutions.

Mezouar also highlighted the strong commitment of King Mohammed VI, Chairman of the Al-Quds Committee, to the Palestinian cause, noting that this commitment is also reflected in the role of Morocco as member of the Arab Quartet.