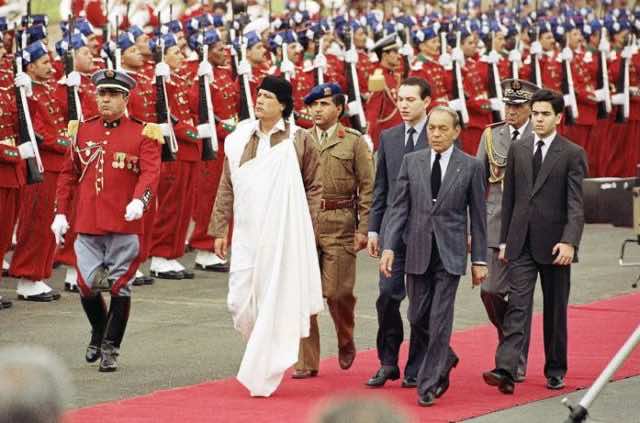 Toronto – Recently declassified CIA documents have revealed an assassination plot against King Hassan II. The shadowy figure behind the plot was none other than former Libyan Muammar Gaddafi.

In total, 13 million documents were released January 18, representing 25 years of CIA activity. While not all the documents are of interest, Moroccans might be surprised to learn that hundreds of thousands revolve around Gaddafi, in the beginning a brash young man and King Hassan II, thirteen years his senior. Spanning the years from 1940 to the 1990’s, the documents reveal a sometimes stormy, sometimes borderline fraternal, but usually tense rapport between the two leaders.

Never one to pull his punches, Gaddafi openly criticized King Hassan II in a way that worried the US embassy in Rabat in 1973. In a note written by the embassy to the US State Department, Gaddafi’s personal attack in front of a general congress was an indication that the two countries had, most likely, entered “a new period of tension.”

At the time, King Hassan II had held a referendum in Morocco on the Arab-African Union. Gaddafi had few kind words to say about the monarch ignoring the referendum two years later, in favour of, in Gaddafi’s opinion, acting unilaterally on the issue. As the documents reveal, Gaddafi’s criticism of the monarch was very personal;

“This is crazy. It would have been reasonable had he invited his people to give their opinion on the rupture. This is the sign of a sick mind; I don’t believe that this act could have come from a healthy mind.”

Gaddafi saw himself at the time as the “guide of the revolution” that dominated the Arab political atmosphere of the 1970’s. He saw monarchs and, in particular, Arab monarchs as “lunatics,” according to the same source, and two of the examples he cited were Morocco’s King Hassan II and Jordan’s King Hussein. In a visceral quote, Gaddafi said of the two men, “Those who are now kings and crowned princes are mental patients.”

The Sahara issue was about to cause a deep rift between the two leaders. February 27, 1976 was the day the Polisario Front established its self-proclaimed Sahrawi Arab Democratic Republic (SADR). Gaddafi sided with the Polisario front, supplying them with weapons. In a communication to King Hassan II, Gaddafi pleads the Sahrawi case: “Who denies the will of the people of the Sahara and who denies the right of those who took up arms to liberate their country by themselves?” Gaddafi said according to the CIA documents.

Still, in this same communication with the king, Gaddafi speaks of his belief in “an Arab unity, from the Atlantic Ocean to the Gulf.”

According to further documents released by the CIA, by 1984, as war raged in southern Morocco, relations between King Hassan II and Gaddafi began a slow thaw. Eventually it led to the signing of an Arab-African Union treaty in Oujda, calling for the end of Libya’s supply of arms to the Polisario. This was a move that both surprised and worried the US State Department.

During a documented call between King Hassan II and US Senator Kasten, the Moroccan Monarch stood his ground on the agreement. He openly called American concerns “hypocritical,” accusing the US of criticizing Gaddafi publicly while benefitting privately; “America has bought its oil, several citizens live and work in Libya and an American company is leading the recent underground irrigation project, worth several billion dollars.” Hassan II said.

Hassan continued his rebuke, “Which treaty, covenant, agreement or union has the US given me? Nothing.”

At the end of the call, Senator Kasten urged King Hassan II to be mindful of American concerns regarding Libya and “take seriously their doubts and concerns.”

Predictably, the co-operative feeling was destined to fade, it was inevitable. Recently declassified documents reveal that, according to Abu Bakr, former head of the political department for the Palestinian Revolutionary Council, by 1987 Gaddafi went as far as to participate in a plan to assassinate King Hassan II. To help in this endeavor, Gaddafi enlisted the aid of Sabri Al Banna, better known as Palestinian fighter ‘Abu Nadal.’

Speaking about the release of these historic documents in a press release, director of the management of the CIA information said. “Access to this historically important collection is no longer limited to geography… Now everyone can access these documents from his own home.”