Morocco World News
Home Health Morocco’s Children of the Moon, Grew in the Dark with No Medical... 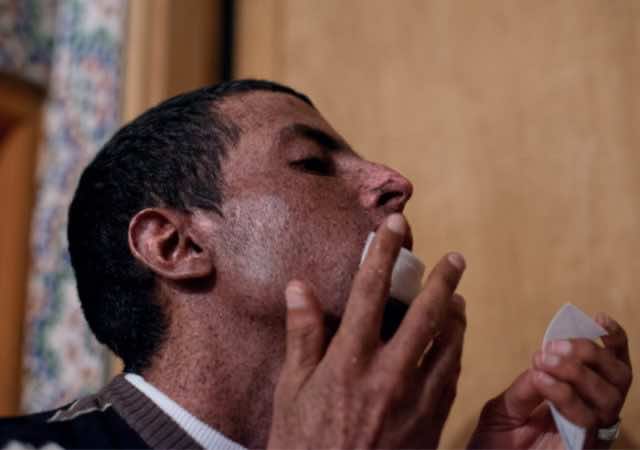 Rabat – The fatal skin disease Xeroderma Pigmentosum afflicts around 800 Moroccans, but those with the condition suffer from minimal official medical support.

Driss Hamouti is skinny with a freckled face and a tumor on his lower lip.

“Sometimes I just hate myself,” says Hamouti with tears in his eyes. “I ask myself why exactly me. Why is this happening to me, not someone else?”

Hamouti, 24, is one of an estimated 800 Moroccans who suffer from the fatal skin disease Xeroderma Pigmentosum, known as XP. Unusually prevalent in Morocco, XP is characterized by a hypersensitivity to the sun’s ultraviolent radiation, resulting in freckles, tumors, and blindness. Hamouti is the only member of his family with XP. 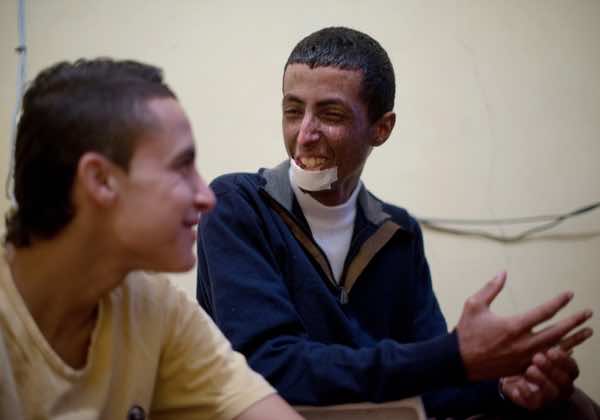 “We thought it was just a simple fever, but the color of his face changed. It was as if something inside of him came up with a darker color, and then he couldn’t see,” said his mother Drissia El Ayouti, 58, who lives in Tiffelte.

Hamouti’s health struggles started when he was just one year old. At first El Ayouti says she thought her son’s only symptom was  blindness, but as the disease progressed, tumors started to appear and his face became freckled. The doctor ordered his mother to keep her son in a dark room away from sunlight as a precaution. The doctor did not explain to El Ayouti what was exactly wrong with her son and did not convey the dangerous damage that sunlight can cause to his DNA.

“He is so stubborn; no one can change his mind.  Sometimes he refuses to protect himself and goes outside even though  we try to stop  him,” says Wafae Hamouti, 27, Driss’s older sister.

When he was just a little boy, Hamouti faced a dilemma – to continue going to primary school, and risk his health by exposure to the sun, or to quit school entirely.  He decided to quit.

Sixteen years ago, Nozha Chkoundi’s son made a different decision.  Her son Mounir Yakdane played soccer with his friends in the sunshine and spent hours at the beach. He didn’t want to give up his normal life.

Mounir’s father, Mohamed Yakdane, a retired mathematics teacher, took his son to a public hospital in Casablanca after being informed that the boy was born with XP.  They had to stand in line out in the sun for hours,  not taking in consideration the damage being caused to Mounir. In fact, Yakdane says, doctors used his son as a teaching tool, gathering around to study the boy’s damaged skin. 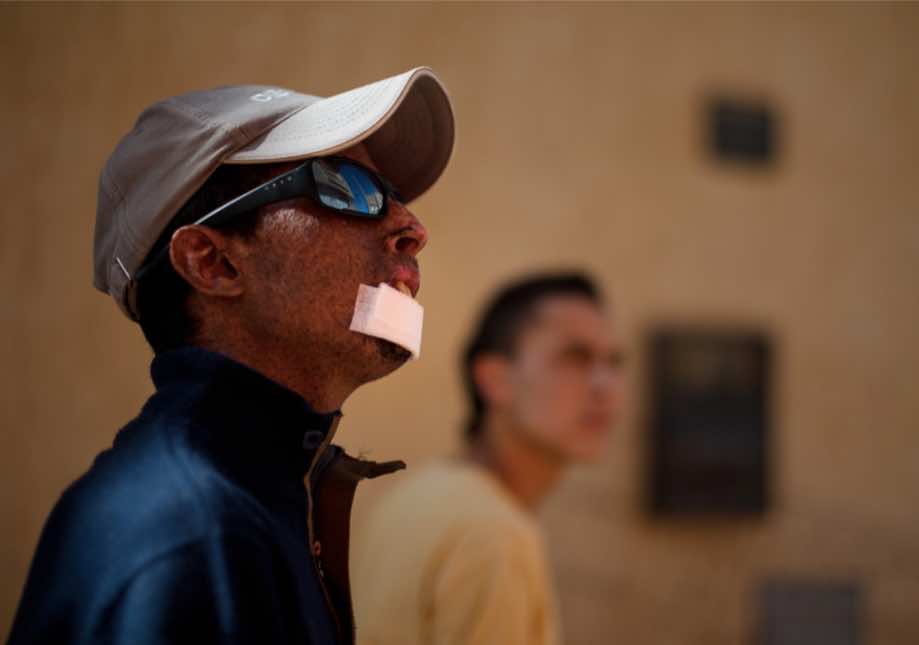 Even after Mounir developed a cancerous tumor in his left eye, his parents couldn’t stop  him from going to school and playing in the sun . He ended losing his eye,  and then his life two years later. He was seven.

“My wife burned all of Mounir’s photos after his death.  She couldn’t take it any longer,” says Yakdane.

The Yakdane family’s fight with XP didn’t stop after their son’s  death. Soon, freckles  started to appear on their  daughter, Sanaa. She  has since spent 20 years in a closed dark room, safe from sunlight but a prisoner of darkness.

“It tears me apart to leave my daughter, who has no future and had no education, at home and go to teach other people’s kids” says Yakdane.

In 2012, Chkoundi formed the Association of Solidarity with Children of the Moon with the aim of informing Moroccans about the disease, supporting XP patients and their families, and gathering  them to share their dramatic struggles with XP. Helping Chkoundi is her daughter Saana, who found has her haven in social media. Through a Facebook page which she manages, she has gathered together over 170 people with XP from all over Morocco, whom she invites to take part in her mother’s association.

The Association of Solidarity with Children of the Moon helps people like Fatima-Ezzahra Ghazaoui, 22, who also suffers from XP. Like Mounir Yakdane, Ghazaoui goes out into the sunlight even she knows the damage that sun can cause her skin.

“Life is too short, especially in her case,” says her father Elhabib Ghazaoui, 59. “It is the reason why I want her to profit from life and enjoy it as she can.”

But there is a price to going out in the sun. Ghazaoui has had 35 operations to replace skin and excise  tumors, as well as having undergone the removal of part of her tongue.

“I am not embarrassed,” says Ghazaoui. “My family and friends treat me like there is nothing different about me. I’m a normal person with a disease. I do not have any problem with that.”

Mohamed El Kotbi, 17, lives in a small room next his school to avoid the danger of walking in the sun. El Kotbi is the only one with the disease in his family, though it is thought that XP may be caused by a genetic mutation acquired when close relatives marry each other, and it is more common in children of consanguineous parents. El Kotbi’s father married his cousin. 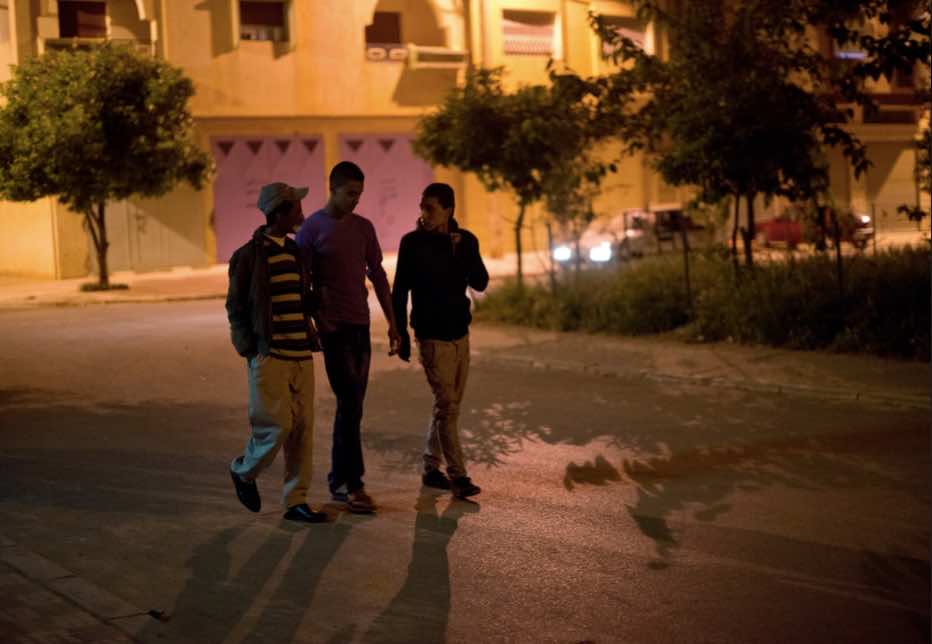 El Kotbi says he struggles with the reaction to his disease.

“I am afraid of people,” he says. “The bad reactions of people scare me. I want them to leave me alone, because I didn’t choose to have a fatal skin disease.”

Still, XP does inspire El Kotbi, who writes rap lyrics about the disease.

“A child of the moon has one small dream,” raps El Kotbi. “And it is to enjoy the sunlight freely.”

People with XP need sunscreen, sunglasses, masks, and other protectants. They often come from poor families, says Chkoundi, but the government offers no financial assistance.

“My one  and only dream,” she says, “is to build a center where those kids can live together protected. They will be able to pursue  their studies and live an easier life.”