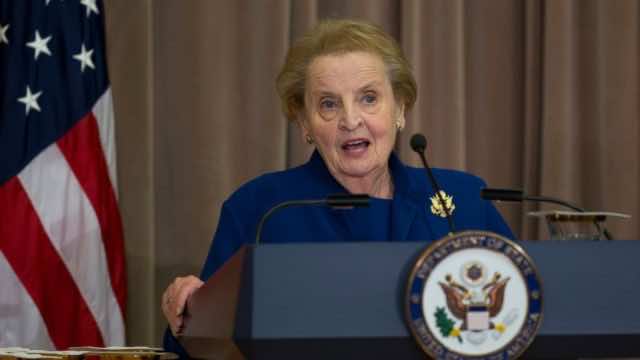 Rabat – During his presidential campaign last year, Trump called for a “total and complete shutdown of Muslims entering the US” and proposed the creation of a Muslim registry.

News is now circulating that President Trump plans to take executive action against the admission of immigrants to the U.S., especially refugees and migrants from Syria, Yemen, Iraq and four other predominantly Muslim countries.

Former Secretary of State for the U.S., Madeleine Albright, has openly declared that she is ready to register as a Muslim in solidarity with Muslims, who will have to be registered if the plan is executed.

I was raised Catholic, became Episcopalian & found out later my family was Jewish. I stand ready to register as Muslim in #solidarity.

At the Women’s Global March last weekend, Albright declared: “If you force Muslims to register, we will all register as Muslims.”

There is no fine print on the Statue of Liberty. America must remain open to people of all faiths & backgrounds. #RefugeesWelcome pic.twitter.com/4LvMiZTRJJ

Albright added that, “America must move forward, but we cannot let our voices be silenced along the way. We truly are stronger together.”

Many are criticizing Trump’s extreme vetting of Muslims. Mayim Bialik, star of the sitcom, The Big Bang Theory, is also openly critical of Trump’s plan.

I’m Jewish. I stand ready to register as a Muslim in #solidarity if it comes to that.

“If we’re registering people who you think are a threat, register white males too, since most serial killers & mass shooters are white males,” said the Jewish Actress.

According to the BBC, many people are vowing to stand in solidarity with the Muslim population of America following Trump’s election. The open support from public figures and celebrities has encouraged others to be fearless in speaking out against the president’s proposed action.

The huge turnout at the Women’s Global March, and the resulting twitter storm last weekend, is a clear example of this.