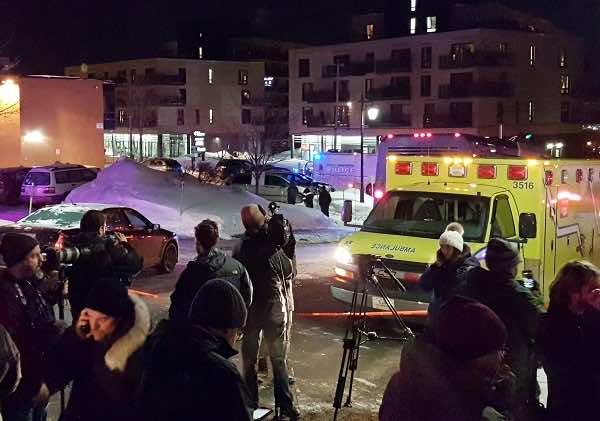 Quebec City – Quebec Provincial Police (QPP) have clarified that only one of the two men taken into custody Sunday night, in connection with the fatal multiple shooting in a Quebec City mosque, is a suspect.

The Canadian Broadcasting Corporation (CBC) has reported that Quebec Provincial Police took to Twitter Monday to clarify that only one of the two men taken into custody Sunday night, following the multiple fatal shooting in a Quebec City mosque Sunday night, is an actual suspect.

The same source said that the second man is now being identified as a witness to the event named Mohamed Khalid. Although there are rumours swirling that this man is of Moroccan origin, nothing can be confirmed at this time.

The city was placed on high alert at approximately 7:45 p.m. Sunday evening when shots rang out at the Islamic Cultural Centre of Quebec City, also known more commonly as the Grand Mosque.

Six worshippers were killed, including one man rumoured to be of Moroccan origin, and up to 12 others injured as a man walked into the mosque during evening prayers and began firing an automatic weapon. It was announced by a CBC reporter on Monday morning that the mosque was equipped with an internal surveillance system and that the attack had been recorded on video. The video is thought to have been turned over to police for their investigation.

At a press conference carried live on the CBC Monday morning, Quebec City’s Liberal Member of Parliament, Jean Yves Duclos, said that the attack was not isolated to Quebec City alone, that it was “an attack on all Quebec,” and that “we have all suffered.”

Speaking at the same news conference, Provincial Premier, Philippe Couillard, said the province has always been known for it’s unified nature and that it is “even more united today.” Directing his next remark to all Muslims living in the province of Quebec he said with great emotion, “May the peace of God be with you.”

When asked by reporters how the Muslim community is feeling in the wake of this attack, one of the community leaders said “When you touch one part of our body, our whole body suffers.” He went on to comment on the support the Muslim community has received from the city, the province and the entire country. “Pain is in our hearts… but there are no words to fully express the solidarity that has flowed… we feel comforted… it honours us and it honours you.”

In a separate press conference, also reported on by the CBC, doctors at the L’Hopital de L’enfant Jesus, where the injured were taken Sunday night, gave an update. Five people were admitted overnight, two of whom remain in intensive care with life-threatening injuries. Three others had less serious wounds and were scheduled to be released later on Monday.