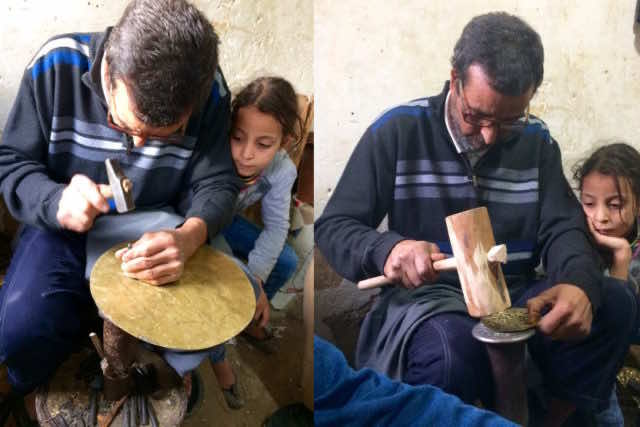 Fez – Amidst the narrow alleyways and buzz of vendors sits Master Houssin’s workspace in the metalware fonduq in Fes Medina.

Born and raised in Fes, Master Houssin is a metal etcher who has been etching copper, bronze and brass for more than 40 years.

Houssin’s interest in etching began as an alternative to his dislike for school. His father wanted him to be productive and sent him to watch his uncle, a master etcher, for lessons. He developed a passion for etching after he shadowed his uncle for three years, then began to create his own work. 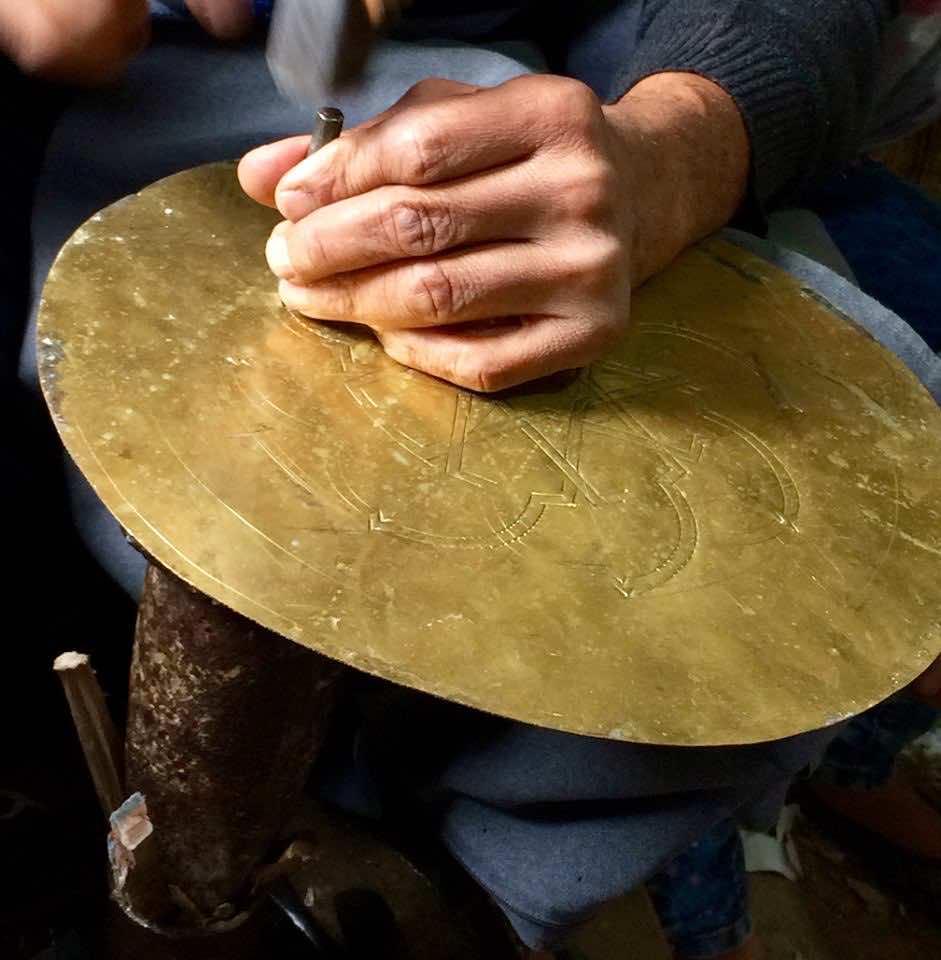 He is known for creating intricate patterns and detailing lamps that sell for various prices. His process begins by purchasing metal from shops in Seffarine Square. He mostly works with yellow copper, which is easier to work with and more popular to sell.

When it is time to begin, he seats himself on his chair and and lays his copper plate on a metal post. He then measures the length and width of the piece with a metal compass and outlines the initial design. A round shape is vital in many parts of a larger design.

All of his etching is done freehand with stark precision, which has taken years to perfect. 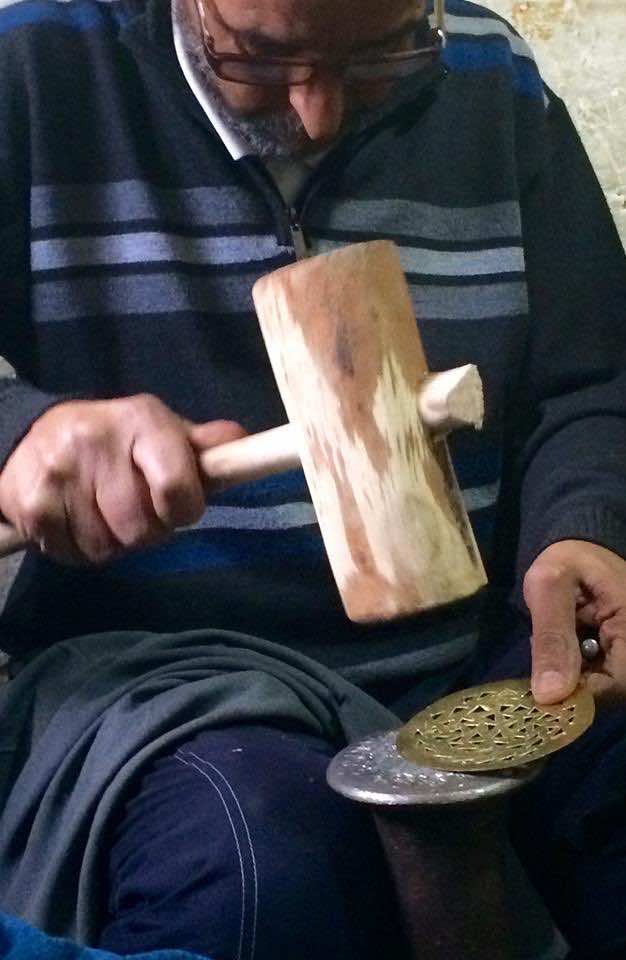 He uses metal hand tools which include a hammer, chisel, and stamps. His work is detailed in various intricate patterns, one of which the the recurring Seal of Solomon. The unique aspect of handicraft work is that one piece is never exactly alike as another; each design is detailed and original.

Houssin is committed to his work for seven hours a day, six days a week. It takes him approximately an hour and a half to two hours to etch a quality platter. When his work is high in demand and he needs to produce quality work over quality, it takes him about 45 minute to complete a full piece.

Once he is finished etching, he hands his work to another artisan, who polishes and builds the final product, such as a large lamp, which has many parts. Traders then buy the finished product and the artisans split the revenue.

Houssin also works on specific projects as per request by traders, which is a majority of his income. Off season, he works on independent projects and directly sells his work to traders.

The art of etching requires immense patience and stability. Houssin said his hands have gotten familiar with the work over the years and he no longer feels pain in them. However, his eyes, neck and back hurt often from being hunched over and focused on one area, which is why proper technique and posture are vital in completing a task. When he first began etching, his master advised him to wear glasses so his eyes wouldn’t experience harsh strain. He did not take the advice at first, but soon realized that he needed the glasses as he aged. 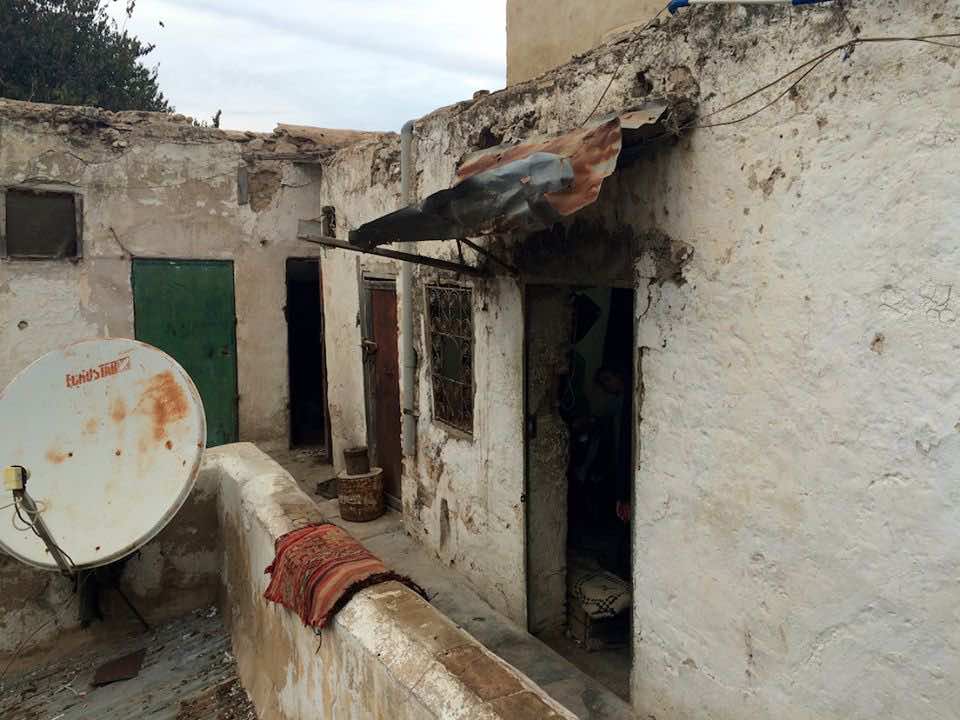 Houssin is part of a rich, artisanal handicraft culture that is a dying art form in the  21st century.

He said that nowadays, the youth are focused on pursuing higher education and have no patience for slow and steady work and living the simple, humble artisan life.

Additionally, there are now companies and schools for artisanal work, such as the one near El Batha Square. However, Houssin has taken advantage of this opportunity and privately teaches students over the summer, which helps add to his income. He also holds workshops for students to spread awareness about the art form.

Houssin says his largest competition is factory-made, mass produced work. Much is imported from China and Korea and is created by laser cut machines.

Nevertheless, Houssin believes that artisanal work is one of a kind and is generally more appreciated and expensive due to its rarity. This is what motivates him to continue creating exceptional work, in hopes of preserving an original artistic medium. 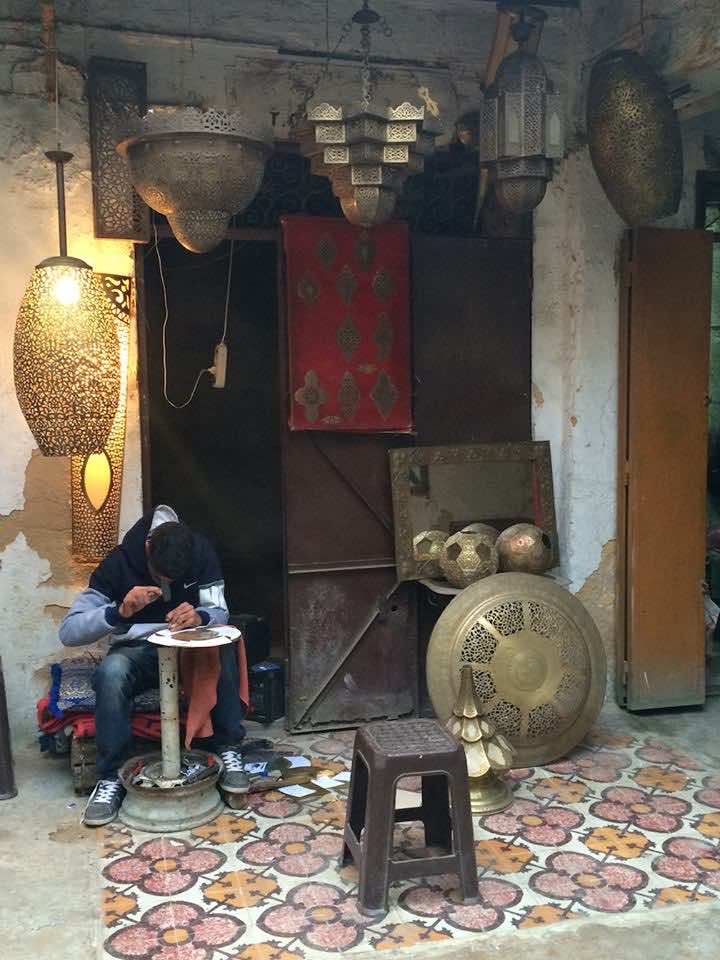