Casablanca - Turkish President Recep Tayyip Erdogan called on Germany’s Chancellor Angela Markel not to use Islamic terrorism, explaining that “Islam and terrorism cannot be together.” 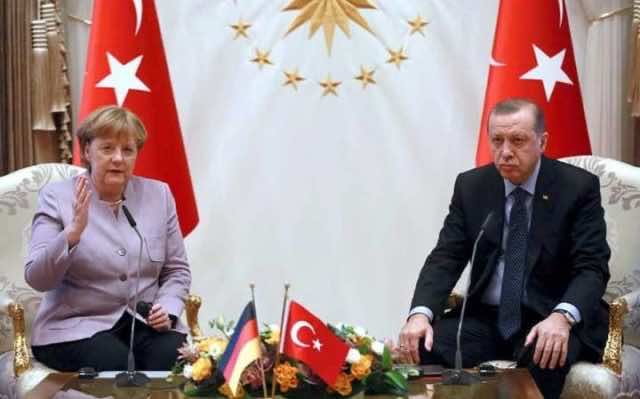 Casablanca – Turkish President Recep Tayyip Erdogan called on Germany’s Chancellor Angela Markel not to use Islamic terrorism, explaining that “Islam and terrorism cannot be together.”

During a joint press conference in Turkey’s Presidential Palace during Angela Merke’ls visit to Turkey, the Turkish president dwelled on the phrase “Islamic terrorism.” It’s a phrase which was used by the German Chancellor during her speech. Erdogan began by saying that the usage of “Islamic terrorism” saddens Muslims around the world, as they know that “Islam and terrorism cannot be joined together.”

Erdogan further explained, “The very word ‘Islam’ means peace [in the Arabic language]” and therefore its association with terrorism is wrong and causes Muslims to feel indignant.

“I would like to draw your attention to the mistake of using this phrase of “Islamic terrorism” and we cannot remain silent about this. I, as a Muslim President of the Turkish Republic cannot accept such a term, which suggests that terrorism is linked to Islam,” said Recep Tayyip Erdogan, addressing the German Chancellor.

Erdogan added that Turkey is leading a war against the Islamic State in Syria and Iraq (ISIS) as well as other organizations such as the Kurdish Worker’s Party (PKK), the People’s Protection Units (YPG), which are considered terrorist.

Angela Merkel remained silent as the Turkish President was making his point. He then noted that the previously mentioned terrorist groups all share a destructive cult and agenda that have nothing to do with Islam.

During her visit to Turkey, which began on February 2, the German Chancellor visited the parliament building that was damaged by an F15 strike during the failed coup attempt last August, and held a joint press conference with Erdogan.