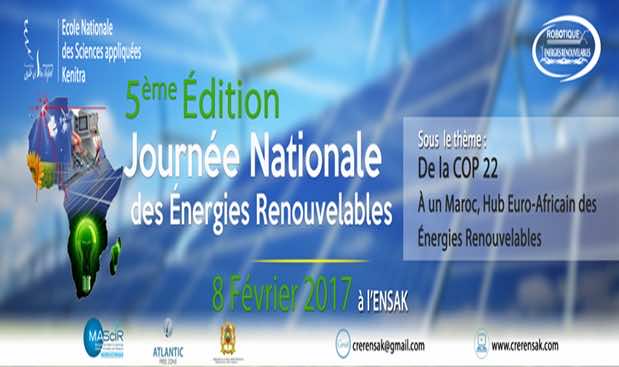 Rabat – Kenitra’s National School of Applied Sciences (ENSAK) has organized its first national event on February 8, celebrating the fifth edition of National Renewable Energy Day, under the title “From the COP22 to a Moroccan Euro-African Hub of Renewable Energy.”

The event is dedicated to discuss the major results of COP22, in particular Morocco’s role in the fight against climate change, as well as the country’s commitment to aid in the development of African countries.

The event will include several conferences headed by professional figures in the field of renewable energy.

The speakers during the event are: the first female engineer in Morocco and former Director of ENSEM Touria Barradi, Executive Director of Sahara-Wind, Khalid Benhammou, President of the Environmental organization Ribat Al Fath Abdelhadi Bennis, and the Professors of Kenitra’s  Faculty of Science Hassan El Bari and Mohamed Aggour.

The event will also host Boubker Chatre, the head of the Renewable Energies department of Ministry of Energy, Mines, Water, and Environment. Chatre will analyze Morocco’s position as a Euro-African hub and aits in the development of Sub-Saharan Africa.

The event is part of the ENSAK’s club activities in the Robotics and Renewable Energies fields. It aims to develop among its members a creative and innovative spirit, enabling students to discover the horizons of the professional world through the promotion of knowledge and practical skills.