Rabat - The House of Representatives (HR) will terminate the autumn session of the 2016-2017 legislative year this Monday.

Rabat – The House of Representatives (HR) will terminate the autumn session of the 2016-2017 legislative year this Monday.

The HR’s council announced the termination in a communiqué, saying that it will hold a public meeting thisMonday, February 13 at 3 PM.

Due to the parliament’s ongoing delay in forming a government coalition and start the legislative year on time, a controversy known colloquially as “Government Blockage,” the closing meeting of the HR’s autumn session might stir contention among the members of the parliament, since they do not have any accomplishments to discuss.

Following the legislative year’s delay, the Authenticity and Modernity Party (PAM) has called on its members of parliament (MPs) to relinquish their monthly allowances of the three past months until the start of the legislative year, saying that such remuneration “is not merited.”

PAM MPs returned their past three months’ compensation to the General Treasury earlier this week.

During the legislative election held on October 7, 2016, PAM was considered the fiercest political rival of the Justice and Development Party (PJD). The PAM gained a total of 102 seats in parliament, securing a position second to the PJD, which gained 125 seats.

Lahbib El Malki of the Socialist Union of Popular Forces (USFP) was elected leader of the HR in January with 198 votes, largely due to the need to adopt the Consecutive Act of the African Union and allow Morocco’s reentry into the African Union. 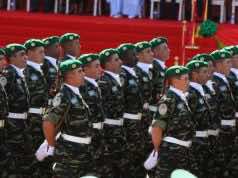