Rabat - In one of his inspiring and insightful speeches, the late king Hassan II described metaphorically Morocco as a big tree with its roots deeply buried in Africa, its trunk in the Arab-Muslim world and its branches in Europe. 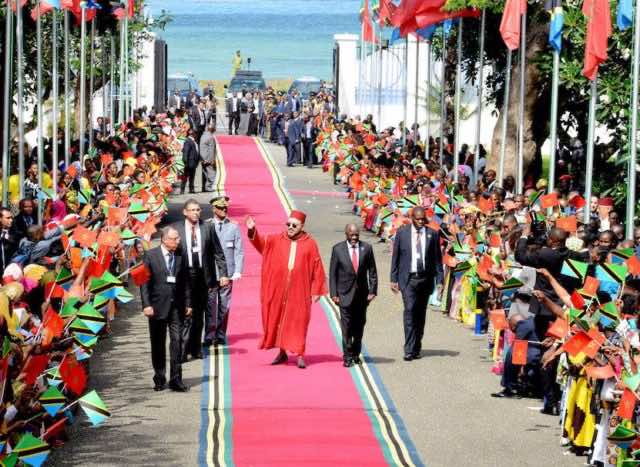 Rabat – In one of his inspiring and insightful speeches, the late king Hassan II described metaphorically Morocco as a big tree with its roots deeply buried in Africa, its trunk in the Arab-Muslim world and its branches in Europe.

This country is, therefore, the gate of Europe unto Africa and vice versa. His successor King Mohammed VI is currently making this metaphor come true. Indeed, besides strengthening ties with Europe, in particular, and the West, in general, he is diving into Africa in search of the roots and the sources of Moroccan culture, to enhance ties and strengthen exchange with its countries.

Bazaar Economy, from Sefrou to Timbuktu

Islam was introduced into Africa by the Amazigh dynasties of the Almoravids (1040–1147) and Almohads (1121–1269) between 11th and 13th centuries and as a follow up the Empire of Morocco engaged in a lucrative trade with the people of this continent.

Caravans started as far north as the city of Sefrou, inhabited by Muslim and Jewish merchants. The famous American anthropologist Clifford Geertz (1926-2006,) in his opus entitled Meaning and Order in Moroccan Society: Three Essays in Cultural Analysis, published in 1979 in cooperation with Hildred Geertz and Lawrence Rosen, spoke in his own contribution on: “Suq: The Bazaar Economy in Sefrou” (pp. 123–225) of the specificities of the bazaar economy of this important commercial center sitting on the lap of the Middle Atlas mountains and serving, in the past, as the point of departure of caravans to the city of Timbuktu in the Sahel.

Prior to 1956, there were two kind of Moroccan Jews in Sefrou: the Sitting Jew who acted as the financier that bankrolled caravan trade with Africa and the Walking Jew who served as the trusted guide of the caravan, known among the Amazigh as azettat because during his long trip to Africa he had to go through the territories of Amazigh tribes to whom he paid protection money and passage toll and, consequently, allowed him to fly the colors of the tribe, represented by a piece of their local woven rug known as azetta, to show that tribal agreement is honored.

With the caravan trade, Moroccan religious influence extended to the African continent mainly the Sufi teachings of Sidi Ahmad at-Tijani  (1735–1815) who lived in his zaouia in Fes and founded the Tijani religious tariqa under the reign of the sultan Moulay Slimane (1766 –1822) that treated him well in spite of his dislike of Sufi orders.

Today, the populations of the whole of West Africa are in many ways disciples of his lodge and are referred to as Tidjane and consider respectfully the visit of his lodge in Fes as a “small pilgrimage.”

On his accession to the Alouite throne in 1999, the taciturn Moroccan monarch Mohammed VI, at the difference of his eloquent father, spoke a little but believed strongly in deeds and acts.

On the 63 anniversary of the thawrat al-malik wa cha’b (Revolution of the King and the People), Mohammed VI in a nationally-televised speech on August 20, 2016 stated forcefully that Africa is a “top priority” and that “this multi-dimensional relationship puts Morocco in the center of Africa” and he went on to stress that “Africa holds a special place in the heart of Moroccans.”

Since, Morocco has rejoined the African Union on January 31, 2017, after a 33-year political absence from this institution, but not economic from the continent.

Morocco drives 85% of its direct foreign investment to the African continent in effective show of the sacrosanct economic concept and philosophy of south-south cooperation by the means of its huge fertilizer company OCP that has built plants in various countries and helps their agriculture with its expertise, the telecom company Itissalat al-Maghrib that owns cell phone companies in many countries where it is developing the infrastructure and preparing the ground for fiber optic technology. With Nigeria, Morocco is planning to build a huge pipeline to deliver its oil to European and Western client countries.

The economic cooperation is, also, bringing Moroccan know-how and long term experience to the banking and insuring services and so many other areas. Morocco also offers scholarships to thousands of African students to undertake tertiary education at Moroccan universities and higher education institutes. It, also, trains gendarme and army personnel in its military schools and religious clergy in its famed Imam Academy.

This fruitful and win-win economic venture is estimated at billions of dollars and is, consequently, creating thousands of jobs for the African youth and bringing wealth and development to their countries. Though this cooperation is making many sub-Saharan countries content and grateful to Morocco, yet Algeria is not happy with it because it threatens its petro dollar hegemony and political influence.

The Algerian officials not only voted against the re-admission of Morocco in the AU with 8 of their allies, but they, also, argued vacuously that the latter country is using economic cooperation with the African continent to serve the interests of the West by opening the markets of its countries to the products of the multi-national companies to counter Chinese influence.

Africa, the Future of Humanity

On Morocco’s re-admission in the African fold (African Union) during the last African Summit in Adis Abeba, King Mohammed VI expressed his satisfaction at the outcome by saying that he is happy to be back home in the continent. And undoubtedly his tearful joy will mean more exchange, more development, and more wealth for everyone in total dignity, harmony and respect.

Africa is undoubtedly the future of humanity, this is not a cliché, it is reality. It has the resources, natural and human diversity, the aspiring youth and the iron will to step into action and make things happen for the benefit of its peoples.

There is, no doubt, a lot the world can learn from this continent. Was it not, after all, the cradle of humanity, dare I ask? The world must, therefore, help Morocco politically and financially in its positive African development safari for the benefit of all. Amen.