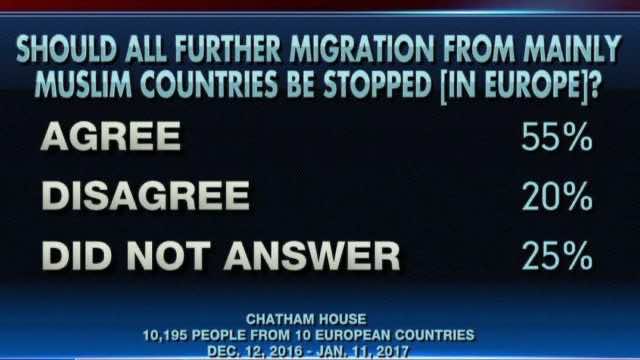 Rabat  – The results of a recent poll show that the majority of Europeans approve of Trump-like Muslim immigration bans, the New Arab reported on Thursday.

Ten thousand people were polled in ten European countries and the results show that 55 percent would approve of a Muslim ban on immigration being imposed in their country.

The study was released by Chatham House on Wednesday and showed that only 20 percent disagreed with the idea of imposing a ban on all Muslims.

According to the same source, the poll was conducted before US President Donald Trump signed his executive order banning all Muslim and refugee immigration for 120 days.

The most intense support for a Muslim ban came from Austria, Poland, Hungary, France and Belgium. In the UK, 47 percent of those polled agreed with a ban being put in place. Thirty percent disagreed and 23 percent declared themselves to be undecided.

It was also revealed in the study that the majority of people agreeing with a ban were older and less educated. Meanwhile people 30 years of age or younger and possessing a university degree, were far less likely to be in favor of instituting a ban on Muslim immigration. The findings of this poll have already been exploited and at times exaggerated by far-right groups and by politicians eager to capitalize on the momentum created by the Trump ban.

Results of a recent poll conducted in the US, and lauded by President Trump in a tweet, have shown that 55 percent of Americans are now in favor of his Muslim immigration ban.