Rabat - King Mohammed VI has been practically living in Africa in the last few years moving from one country to another to propose development programs and cooperation ventures in a transparent win-win approach. 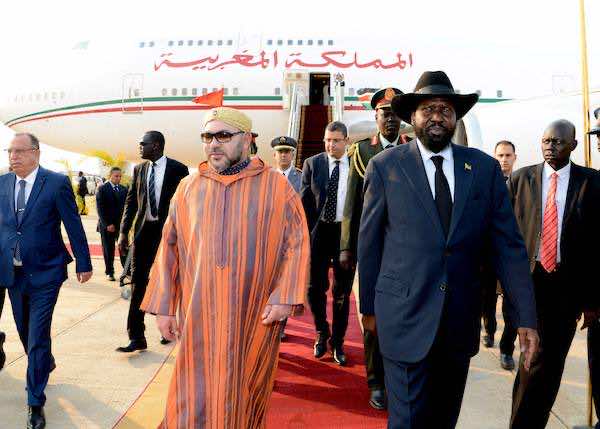 Rabat – King Mohammed VI has been practically living in Africa in the last few years moving from one country to another to propose development programs and cooperation ventures in a transparent win-win approach.

So, when on re-admission of Morocco in the African Union in the Addis Abeba summit on January 31, 2017, he declared with tears in his eyes, to be happy to be back home. The truth of the matter he has always been home though not officially, hoping on his Boeing 747 from one country to another bringing bounty and goodwill.

What is more, for many African Muslims, disciples of the Tidjane Sufi order, Mohammed VI is more than a temporal leader of a northern country, he is a religious symbol bearing the traditional title of amir al-mu’minin “Commander of the Faithful” of the Islamic community of Africa.

The Maghreb Union is long dead

In his acceptance speech of the re-admission of Morocco in the African fold, King Mohammed VI declared solemnly the death of the Maghreb Union. He first underscored that he has always believed in the regional integration of the Maghreb states, but this, alas, did not materialize for a score of reasons and, as a result, he went on to make public the clinical death of this failed union:

“Morocco has always considered that its strength comes primarily from the integration of the Maghreb sub-region. It is however clear that the flame of the Arab Maghreb Union has faded, because faith in a common interest has vanished! The mobilizing momentum of the Maghreb ideal, advocated by the pioneers in the 1950s, has been betrayed. Today, we regret to see that the Maghreb Union is the least integrated region in the African continent, if not in the whole world.”

In this regard, he argued forcefully that intra-regional trade within ECOWAS is at the 10% mark and it is at 19% between the countries of the SADC community, whereas it has always stagnated at the poor 3% level in the UMA (Union du Maghreb Arabe.) He went on to say that while the West African Economic Community is realizing ambitious projects of integration and while ECOWAS is allowing the free flow of citizens, merchandise and capital, the Maghreb is at its lowest level of cooperation since its creation 28 years ago.

So, one wonders why was has the ambitious UMA project faltered so miserably? Indeed, the reasons are multiple and have to do mainly with the two main countries of the union, i.e. Morocco and Algeria, and some of them and are as follows:

France occupied Algeria in 1830 with the intention of making out of it a French territory facing Marseille on the other side of the Mediterranean. So, the concept of Algérie francaise dominated the French colonial policy for the 132 years of the colonization period. To make the territory big, France took entire swaths of land rich in minerals: Gourara, Jbilet, Tindouf, etc. from Morocco, but, also, from other limitrophe countries such as Tunisia, Mali and Niger.

When France realized that it was definitely leaving Algeria in the early 60s of the last century, it turned to Morocco and showed readiness to return the land it took unlawfully, but King Mohammed V refused the offer on the grounds that it will be a form of betrayal of a sister country immersed in independence war.

Mohammed V pointed out that Morocco will discuss the matter with Algeria after its independence. As such, on independence, Hassan II brought up the subject with the Algerian government, nevertheless, the latter categorically refused Moroccan demand and immediately after, in 1963, the War of Sands broke out between the two countries, as a result of that; and

On independence, Algeria became a socialist country and joined, somewhat, the Soviet bloc while Morocco was a liberal economy very close to the Western world. In 1975, Spain expressed its willingness to decolonize the Western Sahara that Morocco has always claimed as an integral part of its defunct empire.

While Boumeddienne’s Algeria paid lip service to the Moroccan move, yet its intelligence apparatus created the independence-seeking movement of Polisario. Morocco organized the Green March and took control of the territory from Spain in 1975. Since, however, Algeria has spent billions of dollars in its support of the Polisario Front besides diplomatic assistance, last of which is its vote against the re-admission of Morocco in the African Union.

It goes without saying that the Polisario factor is the main stumbling block in the integration of the Maghreb from the beginning of the UMA venture in 1989 in Marrakesh. In reality UMA was a still born baby because Algeria’s ego, fortified with the oil bounty, wanted the leadership of North Africa, but Morocco, without meaning to, marred its hegemonic objectives and broke its dream.

Algeria, after half a century of oil bonanza has not achieve any worthwhile development, but has, instead, squandered billions of dollars on costly grandiose projects with almost no or little economic value. A good example f that is the massive highway east-west whose original cost was estimated at 5 billion dollars and is costing today three times as much and it is not even up to international standards, apparently.

The economy of the country is in shambles, its currency is at its lowest and its competitiveness is non-existent. The country lives off its oil and the price of this commodity is ebbing dangerously today. Prestigious International think tanks such as the Washington Institute of Near East Policy that advises and counsels the American government stated, in a recent report, written for the Trump administration that dire conditions are ahead of Algeria.

Had Algeria not surrounded itself with walls: physical, economic, and political with Morocco, UMA would have functioned properly and helped Algeria economically in its post oil era.

Like what King Mohammed VI has stated in his historic speech to the AU summit, UMA is gone to the dogs and consequently dead, but it is not the end of the world. If Algeria retracts from its proverbial animosity to Morocco, the North African countries can create a new institution for economic cooperation and social integration and, undoubtedly, this new body will put, at long last, the region on the world map.

Will the generals in Algeria forget about their hegemonic drive in North Africa and opt out, instead, for cooperation and development, for the long term wellbeing of the people of this part of the world or continue to dream on and utterly lack in any sense of noblesse oblige?