Rabat - A young Syrian family braved -15C weather to reach Canada on foot, dragging their luggage and a baby stroller with them through the snow, according to a CBC report Saturday. 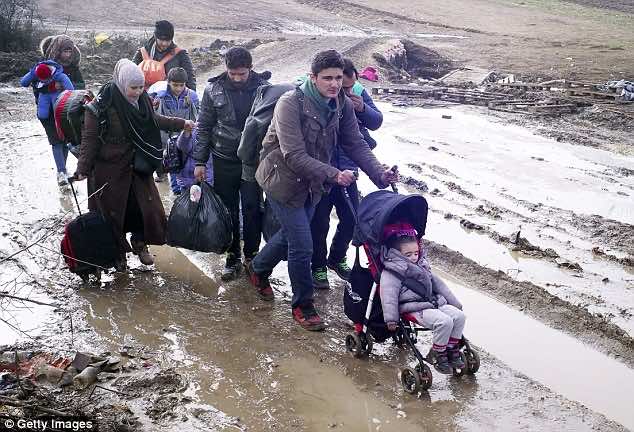 Rabat – A young Syrian family braved -15C weather to reach Canada on foot, dragging their luggage and a baby stroller with them through the snow, according to a CBC report Saturday.

Taking their chances at a popular crossing site along the US-Quebec border, the family was immediately taken into custody, including the couple’s 3-year-old daughter who was carried by an officer to the law enforcement vehicle and gently placed inside.

From the border crossing, the family of asylum seekers was taken to a detention centre in Laval, Quebec for a 48-hour processing period. The area where the family crossed into the country is monitored 24/7 by law enforcement officials. Police affairs analyst, Francois Dore, however, makes it clear that the officials are not there to intimidate but rather to facilitate newcomers they encounter. “There’s a process to follow. The RCMP [Royal Canadian Mounted Police] aren’t there to treat them like bandits. They’re here to apply the law.”

The next step for the family is a hearing in front of the Immigration and Refugee Board of Canada. Until that date is set and a decision is made on their refugee status, the family is free to remain.

Overall, according to the same source, the number asylum seekers looking for refuge in Canada has quadrupled since 2014. Even so, there has been a surge in border crossings over the past three months, coinciding with the election of US President Donald Trump south of the border and his subsequent immigration ban attempt.

In the province of Quebec alone, asylum seekers making their way from the US numbered 368 in November 2016. By the end of December, that figure had jumped to 593.

According to Julie Lassard, specialist in business immigration, the election of Donald Trump to President of the United States has left many with a sense of heightened anxiety and insecurity. “People are just trying to get better lives, so if the ban comes back in another form- and because of the insecurity that it all created- well, definitely there was an increase in the last couple of weeks of the number of people trying to cross the border. I don’t see it ending at this point in time.”

Canada abides by what is called the Safe Third Country agreement., which was designed to limit the number of refugee claimants in Canada. Refugee status under the agreement can only be claimed at an official border crossing and in the first safe country that the refugee arrives in. It does, however, mean that anyone who crosses over open terrain, such as this young Syrian family did, can claim refugee status.

Just on Saturday, the Canadian province of Manitoba saw 27 people cross the border over open terrain to claim refugee status. Stephane Hanfield, an immigration rights attorney confirmed that “Not only me, but other lawyers that provide this service” have been receiving regular calls in the past few weeks, seeking information about the Canadian refugee claimant process.