Rabat - The next round of King Mohammed VI’s tour of Africa will start this Monday with trips to five African countries, according to Moroccan daily newspaper Akhbar Alyoum. 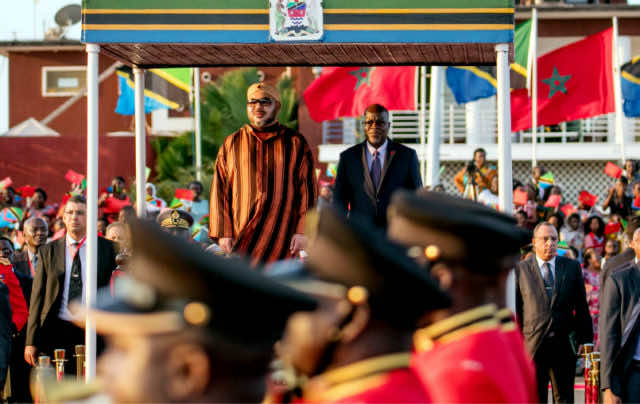 Rabat – The next round of King Mohammed VI’s tour of Africa will start this Monday with trips to five African countries, according to Moroccan daily newspaper Akhbar Alyoum.

With a fresh sense of momentum following Morocco’s recent readmission to the African Union, King Mohammed VI will visit Ghana, Côte D’Ivoire, Guinea-Conakry, Zambia and Mali to further consolidate South-South partnership and embark on cooperative ties with the rest of the continent.

In addition to the economic aspect of the King’s visit, Morocco seeks to prompt Ghana and Zambia, historic supporters of Polisario to reconsider their stance on the Western Sahara issue.

The King’s tour will start on Monday in Ghana. Since his succession to the throne in 1999, the King has never paid an official visit to Ghana. His visit is expected to revamp the bilateral ties between Accra and Rabat.

King Mohammed VI is expected to receive a warm reception in Ghana, which is currently experiencing a change in its orientations following the December 2016 election of Nana Akufo-Addo as president, defeating outgoing President John Mahama.

Ahead of the King’s visit, which was originally scheduled for January, Akufo-Addo prepared extensive festivities, saying in a statement that the King’s visit will “deepen” the existent cordial relations between the two countries and will provide an opportunity to define new areas of co-operation that would serve their common interests.

In addition to the King’s visit, the Moroccan-Ghanaian Forum held in mid-January in Accra, which brought together businessmen from the two countries might lead to the signing of bilateral agreements during the visit.

The King is set to head to Guinea’s capital of Conakry in the middle of the week. The country’s President, Alpha Condé is considered one of the King’s friends. Condé played a major role in Morocco’s return to the African Union (AU) during the 28th Summit of the AU held in Ethiopia’s Addis Ababa in late January, 2017.

While chairing the summit, Condé aborted the maneuvers of Morocco’s rivals, urging them to respect the majority of countries that supported Morocco’s return to the pan-African organization.

Guinea’s officials recently convened in order to prepare for the King’s visit.

As soon as his visit to Guinea ends, King Mohammed VI will depart for Zambia’s capital, Lusaka. Zambia was also set to receive the King in December, but the King’s visit was ultimately postponed.

Zambia is one of the Polisario’s supporter. During its preparation of the King’s visit in January, Zambia’s President, Edgar Lungu, was subjected to diplomatic pressure from South Africa to support Polisario. However, Lungu, as the president of the new generation, seems willing to break the constraints of the past and move forward to form fruitful economic relations with all African countries.

Mali is the fourth destination during King Mohammed VI’S tour. Mali has attempted to preserve its relations with both Morocco and Algeria.

Côte d’Ivoire, which is one of the leading countries in the west of Africa, is the last destination of the King’s tour. Competing with France, Morocco has become one of the foreign investors for Côte d’Ivoire.

This long-standing Moroccan ally was among the 28 countries that presented a motion to the 27th summit of the African Union in Kigali, Rwanda, last July in which they called on the pan-African body to suspend to the self-proclaimed SADR membership.