New Delhi - A suicide bomber rammed an explosive-laden motorcycle into a government judiciary van in Peshawar, Pakistan on Wednesday, killing the driver and wounding four others. 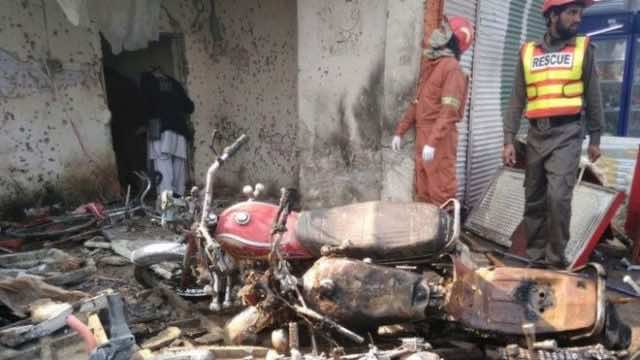 New Delhi – A suicide bomber rammed an explosive-laden motorcycle into a government judiciary van in Peshawar, Pakistan on Wednesday, killing the driver and wounding four others.

The suicide blast was one in series of violent attacks aimed at destabilizing Pakistan. On Monday, February 13, a suicide bomber killed 13 people targeting police officers at a protest in Lahore, with more than 50 others wounded. The Tehreek Taliban Pakistan (TTP) claimed responsibility for Wednesday’s attack.

The group also threatened to carry more of such attacks.

The statement further explained that “those who work for the Pakistani Judiciary are an obstacle to the imposition of an Islamic system. These people are the reason for mujahideen [fighters] being jailed or executed.”

The attack appeared to be targeting government judicial employees in the Hayatabad area, police officials said.

Police immediately sealed off the area and setup a security perimeter. The death toll has been confirmed with the driver of the van reported to be dead and four others injured. The injured have been shifted to a near by emergency medical facility.

“We have found body parts of the bomber as well as his motorcycle, which hit the van,” said the investigating officer in a report shared with media.

Muhammad Tahir, Peshawar’s police chief, said, “The initial analysis shows that at least 15kg of explosives were used in this attack.

“In anticipation of such attacks, precautionary security measures had been taken beforehand as a senior opposition leader Imran Khan was supposed to visit a medical facility nearby the site of explosion. There was a heavy deployment of police and a squad of bomb disposal unit was active hours earlier.

The attack came hours after a suicide bombing at a government office in the nearby Mohmand tribal area in which  three policemen and two civilians were killed.