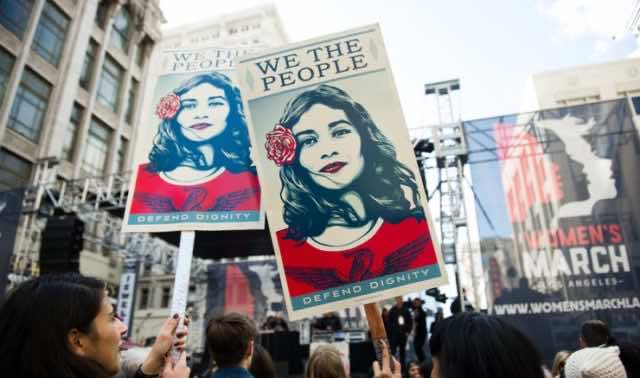 Rabat – The organizers of the Women’s March announced on February 14 that they will hold a general strike on Wednesday, March 8, entitled “A Day Without A Woman.”

The day was chosen to incorporate the strike with International Women’s Day.

In the aftermath of US President Donald Trump’s inauguration on January 21, 2017, several million women marched in cities across the world (Rabat included) to express their anxiety and anger.

After the “success”  of the Women’s March, according to the New York Times, the organizers promised to continue the fight against the policies of President Trump.

In a Facebook post on February 14, the organizers of the march said that, “In the spirit of women and their allies coming together for love and liberation, we offer A Day Without A Woman. We ask: do businesses support our communities, or do they drain our communities? Do they strive for gender equity or do they support the policies and leaders that perpetuate oppression? Do they align with a sustainable environment or do they profit off destruction and steal the futures of our children?”

They went on to say, “we know that our army of love greatly outnumbers the army of fear, greed and hatred. … Remember: this is a marathon, not a sprint,” indicating that there will be other strikes to come.

The strike is planned for March 8, International Women’s Day, which is celebrated in many countries around the world. It honors women and women’s achievements regardless of their ethnicity, culture, economic status, or political affiliation.

International Women’s Day emerged from the activities of labor movements at the turn of the twentieth century in North America and across Europe. Since then it has become a global recognition of women’s rights and the importance of their involvement in economics and politics.