Rabat - The King of Morocco is visiting Ghana for the first time since he rose on the throne of the North African Kingdom more than seventeen years ago. Although Ghana and Morocco have had different histories based on different choices and specific imposed colonial destinies, the two countries have quite a few similarities : both are millenial countries, are culturally diversified, and  have more or less successfully embraced the principles of good governance, democratization and economic reform since the 90's. 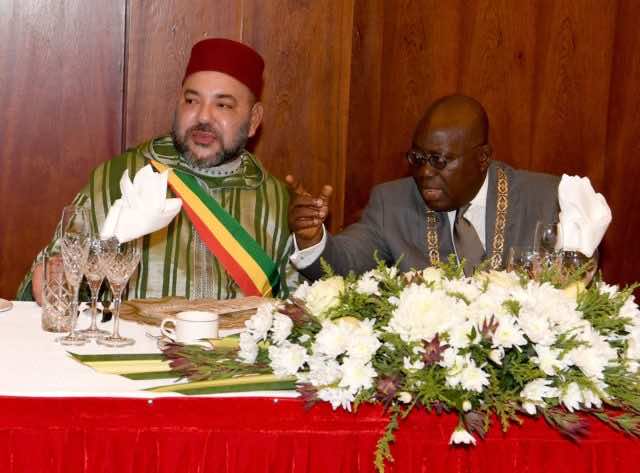 By
Lahcen Haddad
-
Lahcen Haddad is a Strategic Studies Expert
Feb 18, 2017
Spread the love
Rabat – The King of Morocco is visiting Ghana for the first time since he rose on the throne of the North African Kingdom more than seventeen years ago.

Although Ghana and Morocco have had different histories based on different choices and specific imposed colonial destinies, the two countries have quite a few similarities : both are millenial countries, are culturally diversified, and  have more or less successfully embraced the principles of good governance, democratization and economic reform since the 90’s.

Ghana’s past glories, already known at the time of Arab travellers and scholars as part of “Bilad Soudan” in the 9th Century, renewed under the Ashanti Empire starting in the 17th Century all the way to the 20th Century, have meant that Ghana has always historically been a regional player and power breaker, ruling and breaking deals from its strong well-organized bureaucracy base in Kumasi.

The scramble for gold by the Portuguese, the Dutch, the Danes, the Swedes, the British and the Germans have meant that colonial designs were devastatingly fierce for local wealth and population, but Ghana always rose stronger, whether at the time of the first and second Ashanti Kingdoms or during the post-independence Government of Nkrumah.

After a long period of military rule and coups, Ghana renewed in 1992, with good governance, propserity and good leadership under the Fourth Republic. The efforts made by the successding governements targeted economic growth, improved  governance, reduced poverty and a growing role in regional and international affairs.

As a result of long political stability, economic reforms and a democratic system that allows for an orderly share of power, Ghana made strides governance-wise. It ranked 5th least fragile state in Africa in 2012 and 4th in 2016 on the Fragile States Index; it also ranked 5th least corrupt in Africa on the Transparency International Corruption Perception Index and 7th in Africa on the Ibrahim Index of African Governance, both in 2012. Improved governnance in Ghana meant that reforms were paying off and the population believed in the new political order ushered in by the Fourth Republic.

According to the World Bank, there are still six million people living in poverty in Ghana, with two million living in extreme poverty, but the conutry has made huge advances in reducing poverty from 50 % to 21 %. As World Bank report says: “The steady GDP growth over that period [i.e. between 1992 and 2006] was largely pro-poor.” This means that the wealth created by Ghanian economy, following  adequate and effective reforms carried out by the Governement, were generally more or less shared at a large scale, despite the huge disparities between the North and the South and between rural areas and cities.

The impact of the socio-economic achievements on the Millenium Development Goals, especailly when it comes to education, infant nutrition and mortality and maternal mortality, were impressive. More needs to be done in poor and remote areas but the good results have been encouraging.

Over the last four or five years, Ghana has seen some serious economic shocks and macroeconomic challenges. The plummeting oil, gaz and gold prices reduced in a drastic manner the value of Ghanian exports; shortage of electricity led to rationing of energy, which has had negative impact on the economy, according to the World Bank. Inflation has reached close to 17 %, with dire consequences on the living conditions of the poor and middle classes. Public debt is on the rise and it may reach more than 80 % of GDP if you count guaranteed and non guaranteed public and private loans. GDP per capita fell from $1600 to $ 1400 between 2014 and 2016.

Depsite these challenges, Ghana remains a strong country with good governance practices and a capacity to reform that makes it resilient to economic and social shocks. The policy adjustment program suported by both World Bank and IMF, added to a strong banking system, the prospects of improved oil, gold and  gas prices–all of these factors mean that Ghana will renew with a virtuous growth-and-development circle in 2017-2018. When there is political will, and Ghana has it, and popular support, and Ghanians have high hopes for the future, the hurdles become opportunities and the challenges, sources of strength.

The King of Morocco in Ghana will most probably discuss with President Nana Akufo-Addo, how the two countries could muster their strength, their will, their rich heritage to work together for a better future for both peoples and for Africa in general. They will also see how public and private sector could join hands to create ventures that help create wealth and jobs and reduce poverty. The King of Morocco belives in africans taking their fate into their own hands.

I am sure the Ghanian President does two. Morocco and Ghana are regional economic and political players that could, through a stong partnership, pave the way for a real South-South coorpation. All of Africa counts on the will of its visionary leaders like King Mohamed VI and President Nana Kufo-Ado to show them the way, to make them live the dream, the dream of a propseous, just and sustainable Africa.