Rabat - Lindsay Lohan is doing what many in Hollywood might consider the unthinkable.  She encouraging her fellow Americans to get behind their president, according to The Daily Mail. 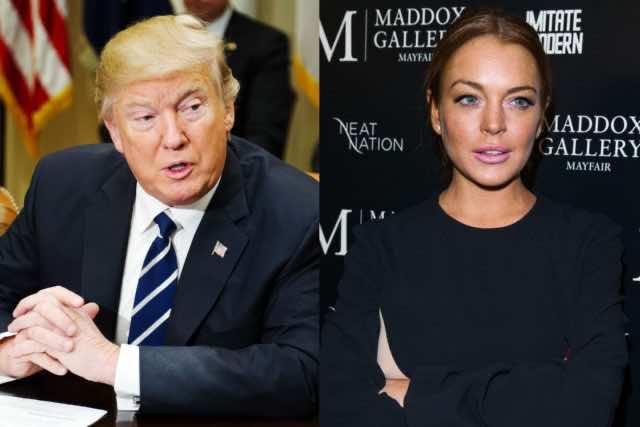 By
Constance Renton
-
Constance graduated from the Television and Radio Broadcasting Program at Canadore College in 1983.
Feb 18, 2017
Spread the love

Rabat – Lindsay Lohan is doing what many in Hollywood might consider the unthinkable.  She encouraging her fellow Americans to get behind their president, according to The Daily Mail.

Lohan is now encouraging Americans to get behind US President Donald Trump, bucking a somewhat less than charitable view of most her peers in Hollywood. “Look, I think always in the public eye you’re going to be scrutinised, and he is the President, so you have to – you have to join him. If you can’t beat him, join him,” she said during a Facebook live interview with The Daily Mail.

This view might appear a generous concession on her part to anyone who remembers Trump’s tasteless comments about Ms. Lohan back in 2004,“She’s probably deeply troubled and therefore great in bed. How come the deeply troubled women, you know, deeply, deeply troubled, they’re always the best: in bed?”

When the audio of the comments were played back to Lohan she retained her dignity, saying “I wish him all the best. We live in a world of societies that consistently find fault in people. I think it’s a really scary factor. Taking someone else down is never the answer, and I think we all know that.”

Ms. Lohan has been spending time in Turkey, visiting Syrian refugee camps and studying the Quran, calling Islam “beautiful.” She hasn’t done it yet, but Ms. Lohan isn’t shying away from the possibility that she will convert to Islam. She has been studying the Quran for a while now, calling the religion “beautiful.” Asked about the chances of converting she said, “Anything’s possible.”

For now,the actress isspending time encouraging her peers to get involved in helping refugees everywhere. She is also openly encouraging the US President to become more aware of the issue of Syrian refugees, which seems unlikely to have any lasting results, given Trump’s penchant for travel bans.

“Turkey really is doing a lot,”Lohan said, “and that’s why I want to try and get the word out to Donald Trump to bring him over there, and have him see all the positive things that they’re doing and how America can help as well… I think it would be a positive thing for America to show their care and support, and for him to experience what it’s like for these people and experience how giving Turkey has been to the refugees.”