Rabat - Albeit the nemesis Algerian government and its traditional cronies in the African continent i.e. South Africa, Zimbabwe, Angola, etc., the whole world is applauding king Mohammed VI relentless efforts to set a purely African south-south cooperation scheme with the honest intent of creating wealth and sharing it equally within the African continent. 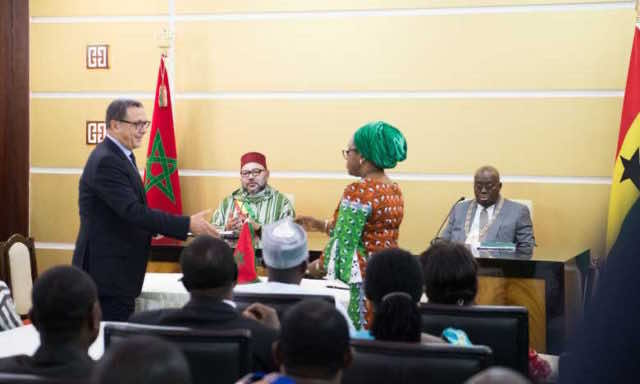 Rabat – Albeit the nemesis Algerian government and its traditional cronies in the African continent i.e. South Africa, Zimbabwe, Angola, etc., the whole world is applauding king Mohammed VI relentless efforts to set a purely African south-south cooperation scheme with the honest intent of creating wealth and sharing it equally within the African continent.

The World Is Changing Rapidly

Trump’s America is more interested in surrounding itself by walls than building bridges of exchange and understanding with the world at large and is currently, instead, making of international trade a lethal weapon and not a magic stick to create jobs and happiness around the world.

Old Europe, which, once upon a time, reached out to the south for manpower to rebuild after the devastation of WWII, is, now, scared to death of migration that might change irrevocably the human geographical map of this continent forever.

While the West is shaken to the roots by doubts and fears and, consequently, is retreating into populism, bigotry and xenophobia, and, by so doing, burying reluctantly its recent creation called “globalization,” China is on the rise. It is attempting to control the world by means of commerce and its immediate target is the south where it is duly spreading its tentacles and influence.

In the midst of international fear, doubt, racism and protectionism, King Mohammed VI, riding his steel horse (Boeing 747) is tirelessly going from country to country in Africa proposing beneficial cooperation schemes within honorable win-win ventures. The concept is simple; Morocco will bring fresh capital, expertise and willingness to create wealth and jobs for everyone with no strings attached to it in return for administrative and economic facilities. So far, the response from the concerned parties has been tremendous.

In a report written for the Trump administration by Robert Satloff[i] and Sarah Feuer[ii] of the prestigious Washington Institute For Near East Policy[iii] entitled: ‘Strengthening stability in northwest africa – Ideas for U.S. Policy toward Morocco, Algeria, and Tunisia,’ these two respected experts argue, quite rightly, that:

“In recent years, King Mohammed VI has sought to expand the kingdom’s economic, diplomatic, and security-related influence across Africa. The strategic repositioning has been reflected in efforts to establish Morocco as a financial hub for African investment, the decision to seek to rejoin the African Union after years of boycotting the organization over its stance on Western Sahara, reforms aimed at training the region’s religious leaders to counter extremist ideologies, and participation in regional security initiatives such as the TransSahara Counterterrorism Partnership. The United States should welcome, encourage, and support these initiatives. Such support could range from efforts by the Commerce Department to highlight Morocco’s role as a continental hub for U.S. businesses to bolstering the U.S. participation a high-profile events such as the Marrakesh Security Forum, an annual gathering of African security and diplomatic officials.”

Other governments around the world welcomed the Moroccan attempts to create positive partnership venues in Africa, seeing in this enterprise a courageous move to help and benefit mutually in the good spirit of: ”scratch my back, I will scratch yours,” and away from any form of hegemony or control.

The Moroccan public and private conglomerates are moving en masse to invest in Africa and create beneficial economic opportunities for both sides. Moroccan companies have, indeed, accounted for nearly 9 percent of the business transacted in Africa.[iv]  Some of these companies are as follows:

– Banking institutions: Moroccan banks such as: Banque Populaire, Attijari Wafa Bank, BMCE have taken over failing African banks and are managing them into profit anew and have, also, created their own banks for business and investment in the continent;

– Insurance: The big insurance company Saham is extremely active in the insurance business in many countries in which it managing profitable business;

Probably, the biggest Moroccan project in Africa so far is the future oil pipeline that will bring Nigerian oil to the Mediterranean coast to make it available for the European continent for use.

For the Atlantic Council,[v] in spite of the fact that Morocco has to grapple with many regulatory daunting obstacles in African countries such as: capital controls, complex hiring and firing processes, and an unwieldy property registry, yet the indicators are compelling: in the 1990s, Moroccan trade with sub-Saharan Africa amounted to an average of US $300 million annually. Since 1998, it has averaged US $529 million annually and reached US $1 billion in 2008.

The Atlantic Council has called on the US government back in 2014, in a report on Moroccan economic positive incursion in Africa, to strengthen cooperation with Morocco:

“Morocco is a long-standing US ally and a burgeoning regional power on a critical continent. And it is in the United States’ strategic interests to further deepen economic and commercial cooperation and cultivate stronger political and security partnerships with Morocco. Given its unique socio-cultural heritage, Morocco also operates comfortably in the Arab, European, and sub-Saharan—particularly, but not exclusively, Francophone— African contexts, and its extensive cultural and commercial relationships with those regions makes it well-suited to serve as a bridge for American commercial diplomacy into Africa. King Mohammed VI, throughout his tours of Africa and in recent addresses to international forums on Africa’s economic development has articulated a clear and reasoned rationale for his commitment to Africa’s growth—calling for example for triangular aid projects to build sustainable programs utilizing regional talents and resources.”

King Mohammed VI skilful economic diplomacy, since his accession to the throne of Morocco in 1999, has efficiently established an economic beachhead onto the African continent for the good of the African people, Moroccan economy and Western business interests. It must be said that this triangulating effort is undoubtedly good for all the sides concerned, bearing in mind that Africa is a true gold mine waiting to be exploited comprehensively by all parties that will come on board and its windfall will be great for the development of the African continent and the wellbeing of its valiant and proud people.