Lusaka - Zambia is glad about the return of Morocco to its African family, said, Monday in Lusaka, president of the Republic of Zambia,  Edgar Chagwa Lungu. 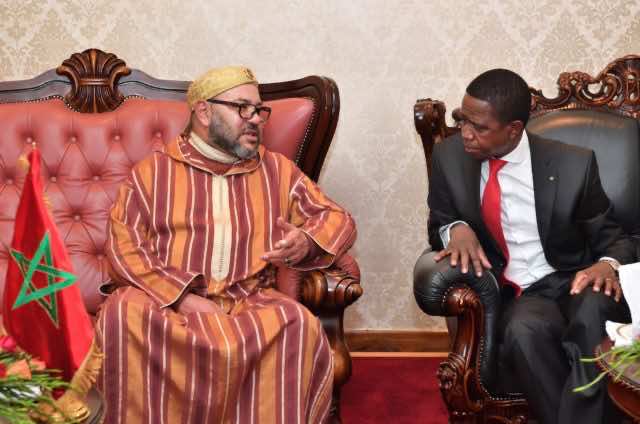 Lusaka – Zambia is glad about the return of Morocco to its African family, said, Monday in Lusaka, president of the Republic of Zambia,  Edgar Chagwa Lungu.

“We have missed Morocco for a long time and we are glad to find him again within its African family,” said Zambian president in a statement to the press following his meeting, at the presidential palace, with King Mohammed VI.

“We are very satisfied with the talks we have had with the King,” he said, adding that the meeting touched on the relations between Morocco, Zambia and the rest of the world.

King Mohammed VI arrived Sunday night in Lusaka for a three-day official visit. This is his first visit to this country, which is among the African countries that have diplomatic ties with the self-proclaimed Saharawi Arab Democratic Republic, which enjoys the diplomatic and financial backing of Algeria and South Africa.

Though Zambia was among the first African countries to recognize the so-called SADR and establish diplomatic relations with it since 1979, its position on the Western Sahara conflict has witnessed a slow shift in recent years.

It was among the countries that signed a motion addressed to the AU during the 27th summit of the pan-African body last July in Kigali, which called for the suspension of the SADR’s membership. Days before that, Zambias foreign minister has announced in Rabat that his country had decided to sever its ties with the Algeria-backed entity.

Despite these moves, Zambia’s position on the conflict remains ambiguous. Evidence to that is that the country’s President Edgar Lungu, received last January the Secretary General of the Polisario Brahim Ghali and reiterated the need that the Saharawi be allowed to exercise their right to self-determination, a position defended and cherished by Algeria and South Africa.

King Mohammed VI’s to Zambia and the panoply of agreements that have been signed between the two countries seek to ensure this country that it has more to gain from developing a win-win economic partnership with Morocco that giving in to Algeria and South Africa’s pressure and buying into their ideological talks.