Rabat - A young Moroccan man living in Prague described his experience as a Muslim immigrant during an interview on the morning show, Prague Morning. 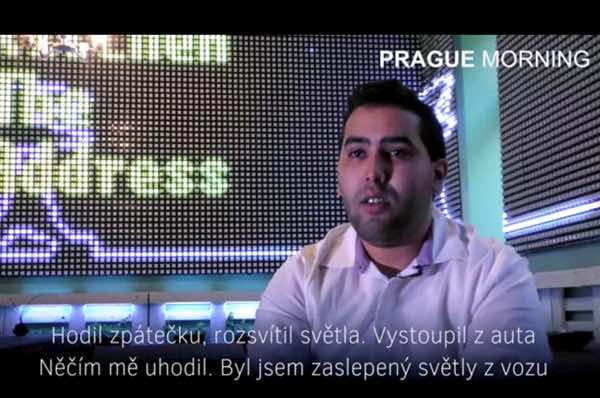 Rabat – A young Moroccan man living in Prague described his experience as a Muslim immigrant during an interview on the morning show, Prague Morning.

Sami Mokhless has lived in many countries and, despite encountering overt racism, he says he doesn’t want to live anywhere else. He can still see the ancient beauty that is the Czech Republic.

Following the last Paris attacked, Sami found himself being challenged by a complete stranger. The man pushed against Sami’s chest, demanding that he remove his jacket to prove he wasn’t wearing an explosive device. People who were standing around witnessing the event said nothing. When Sami asked them why they weren’t coming to his defense, they remained silent.

In another, more serious encounter, Sami challenged an exorbitant taxi fare. To avoid the situation escalating any further, he went ahead and paid the driver, thinking that would be the end of it. The driver, it turned out, had different ideas.

After receiving his payment, the driver allowed Mokhless to exit the vehicle. He then made a u-turn and pulled in front of Mokhless, blinding him with his lights. The next thing the young man remembers, he was being struck with something repeatedly. The taxi driver then drove off, leaving him in the street. Mokhless spent the next four months in a wheelchair and still walks using a cane.

“I don’t think they know I’m from Morocco. I am a Muslim,” he says. One might be forgiven for asking what keeps him from leaving. The answer, he says, is his Czech girlfriend, his work as an investment broker and the fact that he has fallen in love with his adopted city.

As for Islam, Mokhless is philosophical. “For me, Islam is a way of life. It teaches us to respect each other… not to judge other people… not to lie, not to steal.” Life for this immigrant is about living as an example to others, wherever that may be.