Toronto - Hijab-wearing, American patriot, Rumana Ahmed, felt challenged to remain at the White House following the election of Donald Trump as President, but she was determined to serve her country. She lasted eight days. 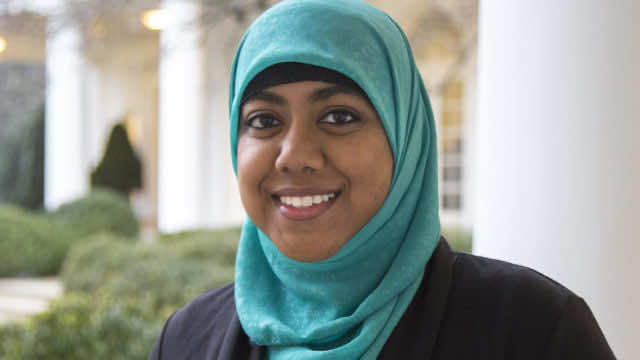 By
Constance Renton
-
Constance graduated from the Television and Radio Broadcasting Program at Canadore College in 1983.
Feb 25, 2017

Toronto – Hijab-wearing, American patriot, Rumana Ahmed, felt challenged to remain at the White House following the election of Donald Trump as President, but she was determined to serve her country. She lasted eight days.

First-generation American, Ahmed was born to hard-working Bangladeshi parents who immigrated to the US before Rumana was born. Her childhood was ideal, complete with family trips to Disneyland, until her beloved father was killed in a car crash when she was just twelve.

This is when she decided to wear the hijab. For Ahmed, it was “a matter of faith, identity and resilience for me.” When she found herself on the receiving end of taunts, especially following 9/11, she was reminded of an old Bangladeshi proverb her father had taught her; “When a man kicks you down, get back up, extend your hand, and call him brother.”

In 2011, after interning at the White House, she was offered a position right out of college. By 2012 she had made her way to the West Wing, joining the Office of Public Engagement. Two years later the National Security Council beckoned.

Ahmad was the only hijabi in the White House but, under the Obama administration, she felt welcomed and included, even valued. For two and a half years she worked just down the hall from the Situation Room, advising President Obama on engagements with American Muslims.

The years 2015 and 2016 saw Ahmed witness a frightening shift in public demeanor. Donald Trump’s vitriolic language during his campaign run had given xenophobes, anti-semites and Islamophobes not-so-silent permission to vent their hostilities in an ever-more-public way. She still remembers learning of the murders of three young American-Muslim college students by an avowed Islamophobe.

Ahmed chafed at the administration’s slow response to condemn the deaths. She recalls wondering why it seemed that the victims had to be vetted before their deaths could be allowed to spark deserving outrage. It left her emotionally devastated. Then, late in February of 2015, evangelist Franklin Graham publicly declared that the White House had been “infiltrated by Muslims.”

The world was turning upside down and Ahmed was still strapped into her White House rollercoaster seat, white-knuckled but hoping for the best. Looking at her community and others across the nation, Ahmed saw the anti-Muslim rhetoric taking its toll. Anti-Muslim hate crimes spiked when Trump began to call for a Muslim travel ban while on the stump. It was feeling eerily reminiscent of the months following 9/11 with one truly notable difference. This time, the hate-fueled messages were originating from Americans in positions of power.

On one occasion, Ahmed remembers encountering the hate first-hand as she was exiting the metro. A complete stranger, a man, approached her and yelled “F*** you! F*** Islam! Trump will send you back!”

The day following Trump’s win was declared, Ahmed and her colleagues gathered in the West Wing, in dazed disbelief, as outgoing president Barack Obama delivered a statement in the Rose Garden stressing the need for a smooth governmental transition. Unlike those who had come by their jobs through appointment, Ahmed found herself in the enviable position of choosing whether to stay or leave. She decided to remain at her post, hoping to present the new administration with a more realistic, nuanced view of Islam and Muslim Americans.

Her optimism was short-lived, however, as she watched new White House staff stare at her with obvious cold surprise. The White House, once a place of inclusion and respect, had overnight been transformed into a “monochromatic and male bastion.”

Where there had been time-honoured and well-oiled order, there was now open chaos. The entire presidential support system was being undermined, neutered by an administration that believed the new President’s authority to be absolute. In Ahmed’s words, there was “no structure or clear guidance.”

It was January 30th, the day Trump’s travel ban was blocked by a Ninth District Court ruling, that Ahmed decided she could continue no longer. The ensuing rage on the part of Trump staffers at the sheer audacity that a lower authority thought it could defy Presidential commands proved to be the final sign Ahmed needed.

She presented her resignation to Trump’s senior National Security Council communications officer, Michael Anton and watched as his faced expressed short-lived surprise, then turned to stone. He accepted her resignation silently but Ahmed didn’t let that stop her from expressing her reasons to him. Looking at him squarely in the eye she told him it “was an insult walking into this country’s most historic building everyday under an administration that is working against and vilifying everything I stand for as an American and as a Muslim.” When he continued to be silent, she added that “the administration was attacking the basic tenets of democracy.”

It was only later that Ahmed learned that, under another name, Anton had authored an essay praising what he saw as the virtues of authoritarianism and describing diversity as a nation’s weakness. Islam had been singled out in the essay as being “incompatible with the modern West.”

Little had Rumana Ahmed known in 2015 that the self-proclaimed theorists spreading anti-Muslim lies leading up to Trump’s victory would end up inside the White House, determining policy for a country whose very character she fears is in danger of being redrawn.