Rabat – While Iranian film director and screenwriter Asghar Farhadi won the Oscar for best foreign language film Oscar on Sunday for his movie  “The Salesman”, he chose not to attend the ceremony due to the “unacceptable” conditions he would endure while obtaining an entry visa to the United States.

Farhadi had originally planned to attend the ceremony in Los Angeles as an opportunity to raise awareness on a decision he found unjust. However, after President Trump signed an executive order keeping refugees from entering the country for 120 days, and banning the entry of immigrants from Iran, Iraq, Syria, Sudan, Libya, Yemen and Somalia for 90 days, he changed his mind.

The ban presented “ifs and buts which are in no way acceptable to me even if exceptions were to be made for my trip,” he wrote in a statement to The New York Times.

Germany’s “Toni Erdmann” was originally expected to win the prize, but, according to the Guardian, support shifted to “The Salesman” following the issue of Trump’s anti-immigration executive order.

A screening of The Salesman was held London’s Trafalgar Square on the night of the Oscars in act of “unity and strength against trump’s travel ban,” said The Guardian.

At the event, London Mayor Sadiq Khan spoke to the crowd, proclaiming his solidarity with Farhadi and those who are discriminated against for their “nationality, faith or background.”

Hours before the Oscars Ceremony began, Farhadi spoke to about 10,000 protesters through a video call in London.

“This solidarity is off to a great start,” he said. “I hope this movement will continue and spread for it has within itself the power to stand up to fascism, be victorious in the face of extremism and say no to oppressive political powers everywhere.”

“The Salesman” premiered last May in Cannes, where Farhadi won the award for best screenplay. The film centers around a couple whose relationship faces challenges during their performance of Arthur Miller’s “Death of a Salesman”.

The 44-year-old won Iran’s first Oscar in 2012 for his film “A Separation”. Winning this second Oscar puts Farhadi in an elite category of double-winners, including Federico Fellini and Ingmar Bergman, according to the Guardian.

At the Oscars ceremony, Anousheh Ansari, the first Iranian to go to space, shared a statement from Farhadi: “My absence is out of respect for the people of my country, and those of the other six nations who have been disrespected by the inhumane law that bans entry of immigrants to the US.”

President Trump’s administration has used the 9/ 11 attacks to justify his decision to ban people from certain countries from entering the U.S. However, according to CNN, the 9/11 hijackers did not come from any of countries banned.

“We are all citizens of the world and I will endeavor to protect and spread this unity,” said Farhadi to the London protestors. 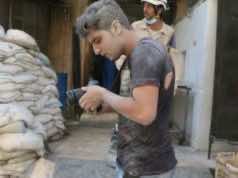