Rabat - The Moroccan student community in Dakar is mourning the loss of one of its students. According to the Senegalese daily Vox Populi, Mazin Chakiri was fatally stabbed  on the night of Saturday, February 25 by a group of unknown assailants.

Rabat – The Moroccan student community in Dakar is mourning the loss of one of its students. According to the Senegalese daily Vox Populi, Mazin Chakiri was fatally stabbed  on the night of Saturday, February 25 by a group of unknown assailants.

Just four meters from his home, Chakri and his girlfriend were approached by six men on three motorcycles.According to Taleb Berrada, the Moroccan ambassador to Dakar, the victim was stabbed “in the thigh and was transferred to the hospital where he succumbed to his injuries.”

The assailants took Chakri’s cellphone and money and his girlfriend’s necklace and purse. His girlfriend, who was not injured, was questioned by police about the attack.

Vox Populi reports that Chakiri was a fourth-year med student at the Cheikh Anta Diop University,  and was soon supposed to defend his PhD.

For his part, Berrada stated that Chakiri’s “body is still in Dakar for the autopsy”, and that the Ministry of Moroccans Living Abroad and Migration Affairs “will bear the costs of repatriation.”

Moroccan students in Dakar have begun organizing themselves to contribute to the repatriation and funeral of their friend.

The ambassador denied any racist motivation to this deadly aggression. “Contrary to what is said in some media, the Moroccan community lives well in Dakar. It’s something that can happen to anyone,” said the diplomat.

The Senegalese police are investigating the circumstances of this crime. 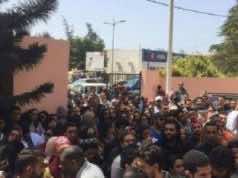