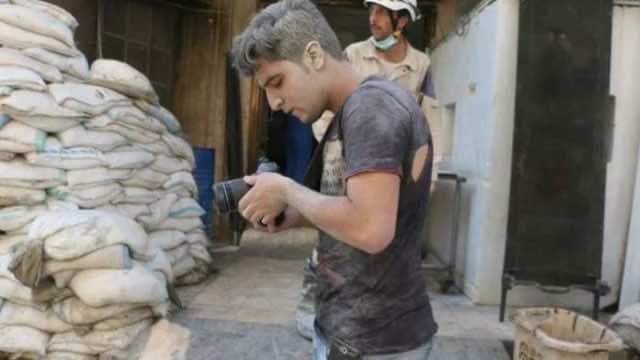 Rabat – Syrian Cinematographer, Khaled Khateeb, was booked to travel to Los Angeles on Saturday to attend the Oscars award ceremony for his work on the film “White Helmets,” which went on to win the award for Best Documentary. The 21-year-old was revoked entry after officials found “derogatory information” about him.

According to The Guardian, derogatory information is a broad category that may include anything ranging from “terror Connections to passport irregularities.”

Gillian Christensen, the Acting Press Secretary for the Department of Homeland Security, told The Guardian, “A valid travel document is required for travel to the United States.”

Citing a statement from the Trump administration, the Associated Press said that Homeland Security officials decided to stop Khateeb from flying to Los Angeles on the day of his scheduled flight.

Khateeb was previously issued a visa to attend the ceremony, but according to the Guardian he needed a passport waiver to enter the country after having been detained in Turkey prior to the day of his flight.

Internal US government correspondence obtained by the Guardian indicated that he would not be able to receive the waiver, but did not explain why he had been detained earlier in the week.

“White Helmets” is a 40-minute Netflix original focusing on the White Helmet first response rescue workers in Syria, who risk their lives saving victims of the country’s civil war.

Khateeb is one of three cinematographers credited in the film, which was directed by Orlando von Einsiedel and produced by Joanna Natasegara.