Toronto  - Sounding a little bit like the boy who cried wolf, US President Donald Trump is blaming former president Barack Obama for the seemingly uncontrolled flow of leaks coming from the White House since Trump’s inauguration. 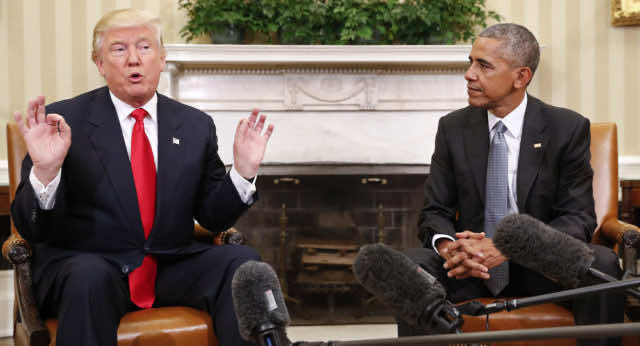 Toronto  – Sounding a little bit like the boy who cried wolf, US President Donald Trump is blaming former president Barack Obama for the seemingly uncontrolled flow of leaks coming from the White House since Trump’s inauguration.

During hisTuesday morning appearance on Fox News’s Fox and Friends, Trump stated his claim plainly saying, “I think he’s behind it.”

Elaborating, Trump said “I think that President Obama is behind it because his people are certainly behind it. And some of the leaks possibly came from that group, which are really serious because they are very bad in terms of national security.”

The US President is also claiming that Obama and people working for him have been behind the large and angry crowds Republicans have been facing recently at town halls being held across the country. He then took the opportunity to assert that the same people were behind the leaks of his less-than-successful private phone calls with the leaders of Mexico and Australia in the days following his inauguration. He has so far, however, offered no evidence of any kind to back up his allegations.

He appeared matter-of-fact about it all, despite talk among White House sources that he has been enraged by the number and extent of the leaks plaguing his administration since its first day on the job. To Fox News he said simply. “I also understand it’s politics. In terms of him (Obama) being behind things, that’s politics. And it will probably continue.”