Toronto - Sources inside the White House are reporting that US President Donald Trump signed off on press secretary, Sean Spicer’s plan to check the cell phones of his staff. 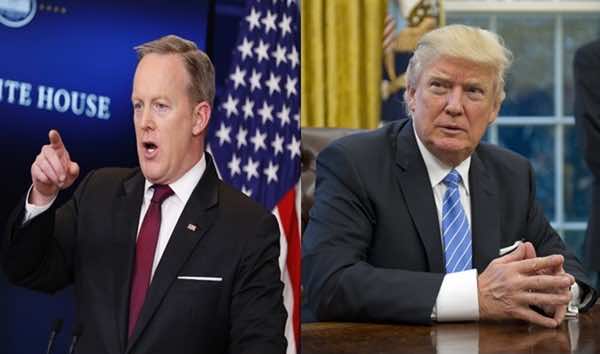 Toronto – Sources inside the White House are reporting that US President Donald Trump signed off on press secretary, Sean Spicer’s plan to check the cell phones of his staff.

According to CNN, multiple sources are confirming that Trump was aware of Spicer’s plan and in favour of it, giving it his full presidential approval. Sources are also saying that Trump has been furious about the scope of leaks leaving the White House since he and his team took office.

Sean Spicer, however, is categorically denying that Trump was involved in the operation that saw Spicer personally examine each work and private cell phone belonging to members of his staff. “Trump did not sign off or even know what I did. That is not accurate. I don’t believe he even knew there was a gaggle and in no way was it discussed with him or any other staffer.” Spicer was referring to the press gaggle which occurred in Spicer’s office on Friday. Several mainstream media outlets such as the New York Times and CNN were barred entry in an unprecedented snub.

According to the same source, Spicer has been steadily gaining a foothold in the White House, being dubbed “the enforcer” by many on the inside for his fierce loyalty to the president and his eagerness to carry out any order he is tasked with performing.

Meanwhile, the ongoing hunt for the source of the leaks remains fruitless. Tuesday morning, President Trump appeared on a Fox News morning show where he proceeded to blame former president Barack Obama for the nonstop flow of classified information coming from the White House. He offered no evidence to back up his claim.