Rabat – President of the European Parliament Antonio Tajani has said the model of immigrant repatriation between Morocco and Spain is one other countries should follow. He thanked Morocco for their efforts to stabilize the Mediterranean and fight against terrorism.

After meeting Moroccan parliament representative Habib El Malki, Tajani expressed his gratitude to King Mohammed VI and the Moroccan government on their efforts on making terrorism situations “less dangerous,” according to European news outlet, Europa Press. He spoke about working together towards overall security, controlling immigration flow, and supporting each other on sustainability issues and unemployment.

Outside a parliamentary meeting, Tajani advocated for enhancing cooperation between Morocco and the European Union. He called Morocco “a strategic partner” in the battle against terrorism and human trafficking, according to Europa Press. Understanding that E.U and Moroccan relations are “crucial,” he urged for greater commercial and economical collaboration between both parties, which would, “eliminate barriers.” he told the press.

“We have to stop the youth from seeing ISIS as a solution. ISIS is death, not a solution,” Tajani said. He further stated that radicalization need to be defeated, and they must strengthen police collaboration in exchanging information to combat terrorism and human trafficking in Morocco and Europe.

“Terrorism knows no borders, that is why we, at a police level, information services have to work closer together,” he added according to Europa Press.

Tajani assured the press that Morocco holds great opportunities for European businesses, stating that it is “more democratic” than other Muslim countries.  According to Europa Press, he explained that human rights are very important for the EU and that they are pleased to see that Morocco are reforming their view on the death penalty and making steps towards religious freedom.“ It delivers a message of trust from Morocco,” said Tajani. However, he stated that the EU cannot interfere in decisions made by the Moroccan government.

The president of the Moroccan parliament celebrated Morocco’s recognition as a partner to democracy after a decade of advanced agreements with the EU, which according to Europa Press demonstrates an essential partnership.

“Morocco is conscious of its responsibilities with Europe, the countries and the provinces of Europe,” said the President of the Moroccan Parliament. 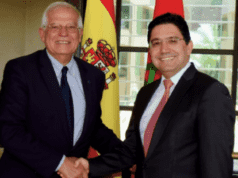