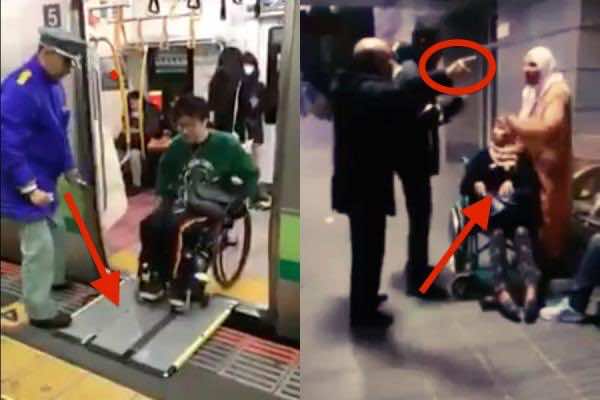 Following the emergence of the video that shows an official barring a woman with special needs and her relative from boarding a train, Morocco World News contacted the National Office of Railroads (ONCF) to discover the reasons behind their refusal to allow them to ride the train.

“The two women entered the train station, not from the main gateway of the station – attempting to travel without paying the ticket under the pretext that they are with woman with special needs,” the ONCF said.

“The officials were trying to explain to the women that they cannot travel without paying the fare not talking about the case of the woman with the special needs,” the ONCF added.

The video shows an official speaking loudly at the two women, saying, “I swear to God, she is not getting on that train,” shouting and vowing repeatedly that the woman who is sitting in the wheelchair would not be allowed to ride the train.

The 1:30minute video shows therelative of the woman in the wheelchair reacting and vowing that she would not buy the ticket, telling thestations’ officials have to help people with special needs. The officials, however, appearto stick to their position of not allowing the woman to get on the train.

“She will not buy the ticket […] you more than everyone else should be helping these people,” the woman said aloud on behalf her relative.

The same video shows another official intervening, and saying “We were helping ‘the disabled’ but the officials have not been merciful with us – [nowadays,] there are instructions sent out from the head department of the ONCF for not allowing them to ride the train [without paying the fare].

In December 2016, the ONCF launched a service for people with special needs to “guarantee their comfort by rehabilitating the vehicles of the train stations and the vehicles’ facilities.”