Rabat - US President Trump’s much-anticipated new travel ban order was finally signed today. Details reveal concessions on key points but critics speculate there isn’t enough different from the original to prevent further litigation, according to a report in the Washington Post. 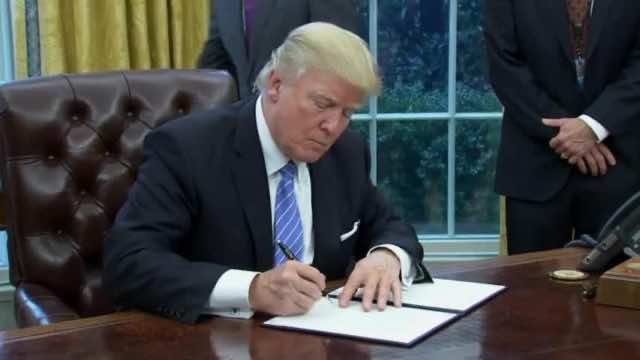 By
Constance Renton
-
Constance graduated from the Television and Radio Broadcasting Program at Canadore College in 1983.
Mar 6, 2017
Spread the love

Rabat – US President Trump’s much-anticipated new travel ban order was finally signed today. Details reveal concessions on key points but critics speculate there isn’t enough different from the original to prevent further litigation, according to a report in the Washington Post.

As anticipated, much in this revised executive order is the same as the original. The refugee program, for example, will be suspended for 120 days, but Trump’s new order slashes the number of refugees who will be allowed into the country in 2017 to 50,000. That is down considerably from the limit of 110,000 set by Trump’s predecessor, Barack Obama.

The new ban will place a 90 day ban on anyone entering the US from six pre-specified predominantly Muslim countries. Iraq, as was predicted, has been removed from the original Trump 7. Secretary of State, Rex Tillerson, credits this to Iraq’s status as “an important ally in the fight to defeat ISIS.”

Far from the fanfare that greeted the signing of the original travel document, this order was signed away from the glare of cameras. This time, instead of an instantaneous start, there will be a delay until March 16 before the ban takes effect to ensure a smoother execution.

The new guidelines block issuance of new visas only, being sought by migrants from the now six banned nations of Yemen, Syria, Sudan, Libya, Iran and Somalia. The new wording in this order specifies that people will be able to apply on a case-to-case basis if they had been previously admitted to the US “for a continuous period of work, study or other long-term activity.” It also covers “those with significant business or professional obligations, or those wanting to visit or live with family.”

Attorney General, Jeff Sessions, lauded the order as providing a “needed pause, so we can carefully review how we scrutinize people coming here from these countries of concern.”

Critics and Democrats alike are still viewing the order as a thinly veiled “Muslim ban.” Washington attorney general, Bob Ferguson, who successfully blocked the original ban in a lower court ruling, conceded that Trump had “capitulated on numerous key provisions blocked by our lawsuit.” He vowed to continue the fight, however, saying that the state is reviewing its next-step options.

Director of the American Civil Liberties Union (ACLU) Immigrant’s Rights Project was duly unimpressed with today’s order saying “The only way to actually fix the Muslim ban is not to have a Muslim ban. Instead, President Trump has recommitted himself to religious discrimination, and he can expect continued disapproval from both the courts and the people.”

Newly detailed exceptions will make the order more defensible in court but, most experts agree, will not deter further litigation. Some of these new exceptions include people traveling from the Trump 6 who are legal permanent residents of the US, dual nationals who use a passport from another country and those granted asylum or refugee status.