Rabat - Morocco was featured among the top 50 best countries by US News and World Report's Best Countries listing, ranking 48th among the 80 evaluated countries.

Rabat – Morocco was featured among the top 50 best countries by US News and World Report’s Best Countries listing, ranking 48th among the 80 evaluated countries.

The report, produced in partnership with Y&R’s BAV Consulting group and the Wharton School of Pennsylvania, evaluated 80 countries across 24 rankings, drawn from a survey of more than 21,000 global citizens in nine sub-categories: Adventure, Citizenship, Cultural Influence, Entrepreneurship, Heritage, Movers, Open for Business, Power, and Quality of Life. 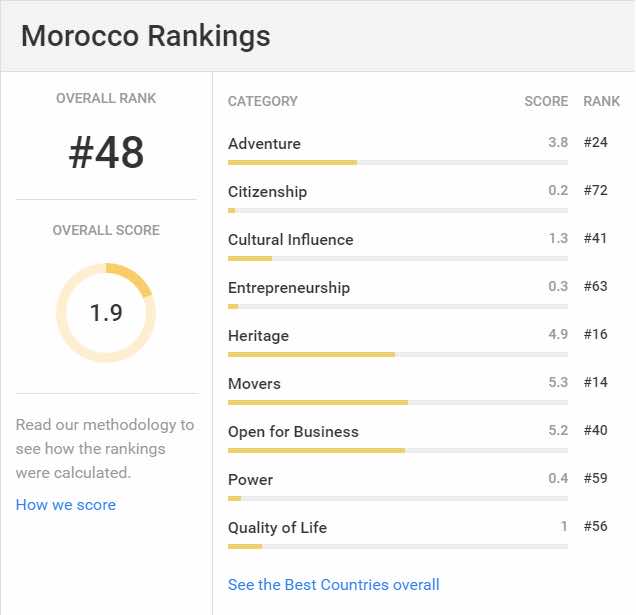 Featured 14th in the Movers sub-category, a sub-ranking based on an equally weighted average of scores from four country attributes (different, distinctive, dynamic and unique) Morocco showed great potential as an up-and-coming economy with a 5.3 overall score on a scale of 10 point.

In the Heritage sub-category, Morocco ranked 16th, thanks to its numerous cultural attractions, rich history, cultural accessibility, and, of course, great food.

A great place to fulfill wanderlust, Morocco came 24th in the Adventure subcategory. With its friendly people, beautiful scenery and pleasant climate, the Kingdom marked a 3.8 overall score.

Morocco also ranked in the top 50 countries open for business. Its cheap manufacturing costs and favorable tax environment make it an attractive destination for investors and foreign businessmen.

The report also lauded the country’s cultural influence, ranking again in the top 50 for its distinct cultural identity and cutting-edge center of art, entertainment and fashion. With a unique and diverse culture, the Kingdom offers a trendy and yet authentic experience for travelers.

The report didn’t fail to praise the Kingdom’s distinct imprint: “In addition to its mountainous interior, sunny coastline and portions of desert, Morocco boasts cities and buildings rich in historical significance.”

In many categories, Morocco emerged as a leader in Africa and the Middle East. Morocco was number one in the Open for Business and Best Countries for a Comfortable Retirement categories among African and Middle Eastern countries; number one in North Africa for Forward-Looking Countries; and second in Africa in the Movers category.