Rabat - The defence board and defendants who were charged with the murder of Moroccan law enforcement officers in the Gdim Izik camp in 2010 have attempted to disallow the screening of a video purporting to show the defendants killing officers performing their duties. 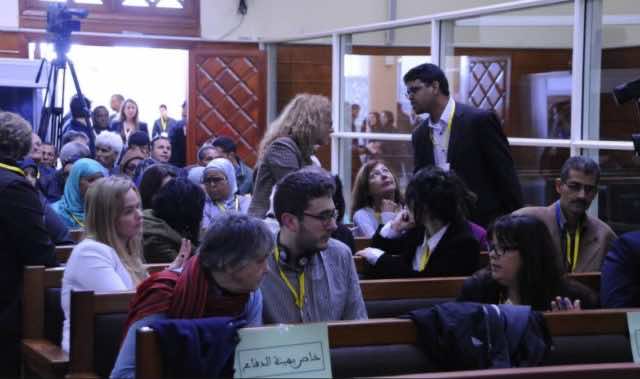 Rabat – The defence board and defendants who were charged with the murder of Moroccan law enforcement officers in the Gdim Izik camp in 2010 have attempted to disallow the screening of a video purporting to show the defendants killing officers performing their duties.

The trial of the 24 defendants, which resumed on Monday at the Criminal Chamber of the annex of Salé’s Courts of Appeals, started with the verification of the accused’s presence to the courtroom, the calling of witnesses and the screening of the video as proof of the tragic incident.

The family members of the victims left the courtroom while the video was screened. They could not bear to watch the officers being slaughtered and their remains desecrated.

The projection of the video caused an uproar among the defendants, who asked the judging panel, “What is the point  of projecting the video of the incidents?”

The Public Prosecutor, Khalid Kerdoudi, said that the images had already been projected in another trial that took place in the military court.

The video, which was filmed by the Gendarmerie Royal, zooms in on the faces of the defendants and frames their faces while they kill the law enforcement officers, who instructed to intervene and peacefully dismantle the camp after a group of Sahraoui people set up tents on the outskirts of Laayoune as a way of protesting against unemployment and the lack opportunities in the city.

The brutal reaction of the Polisario militias resulted in the deaths of 10 law enforcement officers and a firefighter. Seventy people were injured and public property suffered damage.

During the trial, the judge also presented other comprising confiscated materials, including knives, bottle of gas, swords, walkie-talkie that were used by the defendants to communicate with their instructors in Tindouf and Algeria, in addition to a phone found in their possession contain compromising messages.

The reverberations of the incidents continue to be felt, especially by the families of the victims, who are waiting for justice to take its course and for the suspect to pay for the crimes they are believed to have committed.