Toronto - US President Donald Trump has backtracked on his explosive wiretapping allegations against former US President, Barack Obama. 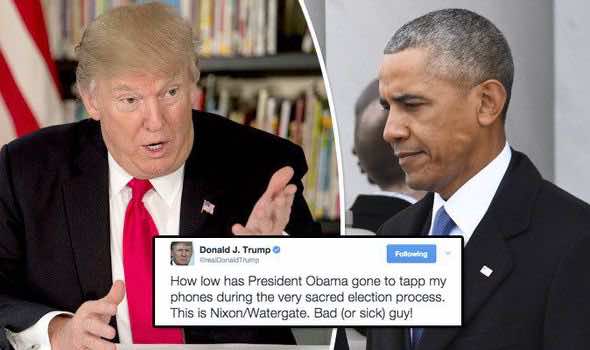 By
Constance Renton
-
Constance graduated from the Television and Radio Broadcasting Program at Canadore College in 1983.
Mar 13, 2017
Spread the love

Toronto – US President Donald Trump has backtracked on his explosive wiretapping allegations against former US President, Barack Obama.

The retreat was delivered through press secretary, Sean Spicer, during his White House press briefing on Monday, according to CNN.

Some say not coincidentally that Monday was the deadline set for the Trump administration to hand over any evidence it possessed to back up the very public accusations made by Trump against Obama.

When asked about it by reporters during the briefing, Spicer provided this new explanation; “I think there’s no question that the Obama administration, that there were actions about surveillance and other activities that occurred in the 2016 election. The President used the word wiretaps in quotes to mean, broadly, surveillance and other activities.”

At the time they were issued, the presidential tweets were very specific:

Terrible! Just found out that Obama had my “wires tapped” in Trump Tower just before the victory. Nothing found. This is McCarthyism!

Is it legal for a sitting President to be “wire tapping” a race for president prior to an election? Turned down by court earlier. A NEW LOW!

How low has President Obama gone to tapp my phones during the very sacred election process. This is Nixon/Watergate. Bad (or sick) guy!

Continuing his Monday briefing, Spicer went on to explain that Trump also referred to Obama in his tweets in broad terms, intending to mean the Obama administration in general, not in a personal sense, as when he tweeted “Obama had my ‘wires tapped’ in Trump Tower.” Nor, according to Spicer, did he mean anything personal against Obama when he called him a “bad” or “sick guy.”

The White House has never offered any evidence to support the Trump allegations against Obama. Just last week Spicer was quoted as saying that Trump’s tweet “speaks for itself,” before also declining to provide any evidence of wrongdoing. There have been, however, several former White House officials who have come forward to deny any campaign of surveillance was ever ordered on Trump Tower.

Spicer’s comments Monday come just one day after top Trump advisor Kellyanne Conway addressed the same issue during an interview on Sunday with the Bergen County Record. When asked if she knew if Trump Tower was wiretapped, Conway said, “what I can say is there are many ways to surveil each other,” suggesting that the CIA could have accomplished their objective using phones or televisions or even “microwaves that turn into cameras.”