Morocco World News
Home Opinion Op-Eds Is Seif al-Islam Going to Be the Savior of Libya and Its...

Rabat - While a feud is raging between General Khalifa Haftar representing the parliament of Tobrouk, in the east, which is militarily and diplomatically supported by Egypt and Fayez al-Serraj, head of the government of Tripoli, recognized by the international community, the population of Libya is regretting the “peaceful” era of Qaddafi. 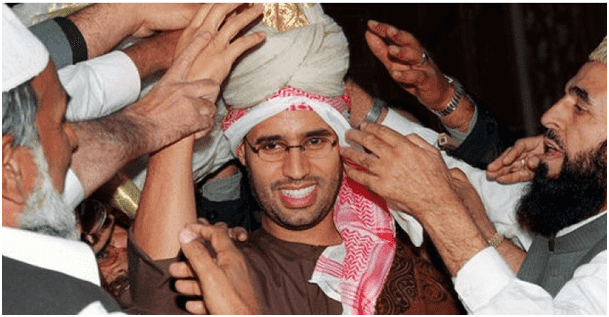 Rabat – While a feud is raging between General Khalifa Haftar representing the parliament of Tobrouk, in the east, which is militarily and diplomatically supported by Egypt and Fayez al-Serraj, head of the government of Tripoli, recognized by the international community, the population of Libya is regretting the “peaceful” era of Qaddafi.

True he was a dictator, but for the Libyans he kept the country stable and provided his people with all their needs and more, whereas, after his demise, it slid into chaos, violence and limbo.

As of today, no one believes that the present warring lords will lay down arms and form a government of coalition because their political egos are more important for them than the wellbeing of the country. A proof of that is they are not trying to talk to each other about a possible solution for the violent conflict which is destroying more and more the country, causing heavy casualties and increasing instability in Libya and in the region.

Nevertheless, there is a flicker of hope appearing in the horizon that might, in the long run, bring relief and peace. Seif al-Islam, the second son of Qaddafi was freed by the Zintan militia to a hero welcome. By so doing, this militia, probably, wants to play its cards right and have an important stake in tomorrow’s Libya. They had arrested Seif al-Islam five years ago as he was trying to join his brother Saadi in Niger.

Seif al-Islam is no ordinary person, in the late years of his father’s reign he was involved in running the country. He definitely had his own vision of new Libya, but would not contest his father’s rule, out of respect and fear, he wanted to bring the change incrementally to a country that is very patriarchal, tribal and deeply conservative. However, the Arab Spring of 2011 compromised his dream. During the uprising, galvanized by revolutionary rhetoric and drive, people saw in him but a mirror image of his brutal and megalomaniac father, no less no more. Now that the Arab Spring is over, not to say dead, the Libyans see him as the possible would-be architect of a new Libya, especially in the light of the ongoing political drama of power struggle in the country.

In view of the dormant and unspoken admiration of the rank and file for him, he will, probably, with the help of the Zintan tribe and its militia gain quickly support among the people of Libya and be enthroned as the next “guide,” without firing a single bullet or twisting any arms, whatsoever. He enjoys a large appeal among the strong tribes of the country and he possesses the charisma of his father without his brutality and eccentricity.

Fearing his re-emergence as a strong player in any future political scenario for the country, al-Serraj government of Tripoli condemned him to a death sentence on July 2015, while the Tobrouk parliament granted him amnesty and, consequently, the Zintan militia freed him within the framework of this amnesty, according to Colonel Ajmi al-Atiri of Zintan.

Will the West throw its support behind Seif al-Islam?

Following the downfall of Qaddafi and the arrest of Seif al-Islam by the Zintan tribe , the International Criminal Court -ICC- called on the latter to hand him to this court of justice, to be tried fairly for his role in quelling in blood the uprising in 2011. However, the militia refused the request and kept the person in question in its prison, probably, for two reasons: firstly, his future importance in politics of the country and, secondly, his wealth worth billions of dollars hidden in the country among his tribesmen and maybe abroad.

The West wants Libya stabilized and ruled by a strong government and a charismatic leader. Both of the current protagonists do not have what it takes to lead Libya into a peaceful, democratic and prosperous future. Haftar is advanced in age and lacks political experience and al-Serraj is a puppet of the Islamist factions and enjoys no consensus, whatsoever among the Libyans. In the light of this, Seif al-Isalm stands out as the man for the future of the country. He is young, 44 years old, well-educated, and has political experience and can muster a large following within the country. So the choice of the West can only fall on him, very much like the Libyans do.

Seif al-Islam can, undoubtedly, bring his own people together, provide a strong government capable of disarming the militias and achieving much-needed stability and security, inject life into the faltering economy and build, incrementally, a democratic Libya open to the Libyans and to the world.

A stable Libya is a must

Today, the instability of Libya is a source of worry for North Africa, Europe and the world at large. It is used by economic migrants coming from poor Africa as a stepping stone to go to Europe for better prospects. But, the problem is that not all the migrants are looking for better living conditions in the European Eldorado, among them there are people with criminal inclinations, as well as, terrorists in the form of sleeping cells.

The militias in power in Libya are allowing migrants in and out of the country for a fee, unconscious of the outcome of such a behavior on stability in the Mediterranean and elsewhere. The instability that has resulted from the fall of Qaddafi’s rule had already brought to the country the plague of ISIS which took the Libyans months and many casualties to get rid of. The country in its failed status of today is an easy prey to religious violence and terrorism and there are still many terrorists lying in the dark in the Sahara desert waiting for the propitious moment to strike at Europe or the Americas or elsewhere.

A stable Libya requires a charismatic leader, a strong army able to control the whole country, a viable and potent police force, an elected parliament and a democratic state. Would Seif al-Islam be able to deliver all of this to the Libyans and the rest of the world or would he just be a mirror image of his brutal father? Only time will show.

Libyan Delegations Begin 3rd Round of Talks in Morocco’s Bouznika