Rabat - The public prosecutor at the Rabat appeal court Hassan Daki assured that the Tuesday hearing, related to the trial of suspects implicated in the Gdim Izik camp events, took place in normal conditions and respected all guarantees of a fair trial like previous hearings. 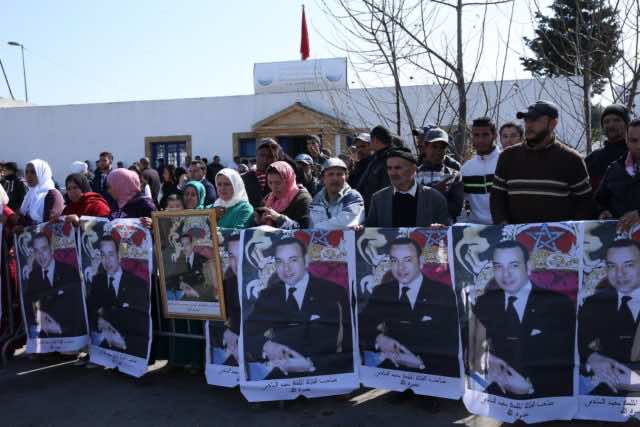 Rabat – The public prosecutor at the Rabat appeal court Hassan Daki assured that the Tuesday hearing, related to the trial of suspects implicated in the Gdim Izik camp events, took place in normal conditions and respected all guarantees of a fair trial like previous hearings.

In a statement to the press, following the cases’ 6th hearing held at the appeal court’s annexe in Salé, Daki said after checking the suspects’ IDs, the court questioned three of them, who were also questioned by the public prosecutor and the plaintiffs’ defence, noting that two suspects refused to answer questions by lawyers of the victims’ families.

The court ensured the Arabic-Hassani translation for the benefit of the accused who required it. The court also facilitated the hearing attendance for relatives of the victims and the suspects, and for Moroccan and foreign observers, in addition to national and international media outlets representatives who came to attend the trial, he added.

The court decided “to resume the audience on Wednesday to continue the questioning of other suspects,” he said.

Twenty-five people are sued as part of the tragic events that took place on Nov. 8, 2010 in the Gdim Izik village and during which 13 individuals were savagely murdered, including 11 members of the forces of order.

The suspects were tried for the first time before a military court in February 2013, and were handed sentences ranging from 2 years imprisonment to a life sentence on the charges of forming criminal gangs and using violence against law enforcement officers leading to their premeditated death, body mutilation and aiding and abetting.

Following the Moroccan military judiciary reform (July 2015) and under which civilians could no longer stand trials in military courts, the cassation court decided to refer this case to a civil court for suspects’ re-trial.