Rabat - As of the third day of the reprise of the Gdim Izik trial in the Criminal Chamber of the annex of Courts of Appeals of Salé, Wednesday, only five out of the 24 defendants charged with the inciting to violence and murder of Moroccan law enforcement and other security enforcement officers in the Gdim Izik camp had been heard .

Rabat – As of the third day of the reprise of the Gdim Izik trial in the Criminal Chamber of the annex of Courts of Appeals of Salé, Wednesday, only five out of the 24 defendants charged with the inciting to violence and murder of Moroccan law enforcement and other security enforcement officers in the Gdim Izik camp had been heard .

The trial, which resumed on Monday after having been continued from January, commenced with the verification of the accused’s identities, the assembly of approximately 30 witnesses from the security forces to be called to testify later, and the screening of an edited video from an  unidentified source showing scenes of violence and killing filmed from a helicopter and possibly from cell phone coverage at the scene.

The video was on a CD that had been transmitted to the Court of Appeal from the military court along with all the evidence in the case. Not knowing what was on the CD, he court decided to screen it and discovered that it was a video showing civilians killing security force officers and desecrating their dead bodies.

Counsel for the defendants objected to the screening of the video which had been edited with commentary in French and arrows and circles indicating specific people and acts, challenging it as highly prejudicial, and asking “What is the point of showing the video of the incidents?”

The court screened the video over their objection. Said to be filmed by the Gendarmerie Royal, the low quality video attempted to zoom in on the faces of the perpetrators as they killed the officers.  Some members of the families of the victims were so affected by the graphic footage that they had to leave the court room while the video was screened.

The camp was set up by a group of Sahraoui people on the outskirts of Laayoune to protest against unemployment and the lack opportunities in the city. The tragic event happened as security officers were attempting to dismantle it, resulting in the death of 10 law enforcement officers and one firefighter, and injuries to seventy people.

The area across the street from the court teemed with the families of the victims and their supporters all week calling for justice to take its course and for the perpetrators to pay for their crimes.

“While the trial has been fraught with many procedural distractions, objections, and numerous requests (similar to motions) by the defendants, defense counsel, and other attorneys representing the civil parties, I was pleased to see the court finally get to the merits of the case this week,” said lawyer and law professor Elisabeth Myers, who is one of a number of international observers from countries around the world.

“The president of the court has so far bent over backwards, even to the extent of hearing repetitive and irrelevant requests, to ensure that all parties are heard and that the process is fair,” she added.  This has been a daunting job with such a large number of parties, and especially given the intransigence primarily of the defendants, who when they have taken the stand have refused to answer questions directly from the court or from the lawyers of the victims, and instead have repeatedly attempted to make speeches about the independence of a Saharaoui state amidst claims of torture at the hands of the security forces after they were detained.”

“In fact, she continued, “each witness so far has claimed that his signed confession was obtained under duress and as a result of torture while in prison.  The way they answered and their stories seem remarkably consistent, as if coached,” she said.

“It was an important development on Wednesday that the President of the Court finally took charge of his court room.  This will move the case forward toward a resolution where justice is afforded to all parties,” she concluded.

The trial continues on Thursday. With the rest of the 24 defendants having to take the stand, followed by testimony of witnesses from the security forces, the case is likely to go on for several weeks. 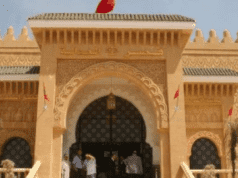