Rabat - A petition addressed to the Embassy of Morocco in London, calls for an investigation into the alleged rape and sexual abuse of a Moroccan teenager by a former British MP.

Rabat – A petition addressed to the Embassy of Morocco in London, calls for an investigation into the alleged rape and sexual abuse of a Moroccan teenager by a former British MP.

The petition, which was sent Morocco World News on Saturday, was also addressed the Moroccan Minister of Justice Ramid, the British Embassy in Rabat, the British Consulate General in Casablanca and the British Honorary Consulate in Agadir.

It calls for an investigation into a case of alleged rape and sexual abuse against a Moroccan boy by a former Member of the British Parliament Keith Harvey Proctor.

The incident dates back to 1987 when the British MP was in the city of Agadir. He was caught in room 101 of what is now known as the Odyssey Park hotel but  was then called the Ali Baba hotel, with a naked 15-year-old Moroccan boy.

The petition indicates that the incident in Morocco is not the only scandal the 69-year-old British MP was implicated in. “Two separate victims have stated that they saw Mr. Proctor take part in child sexual abuse gatherings in the United Kingdom.”

Referring to the incident in Agadir, the petition also uses an excerpt from the Daily Mail that states:

“The [Daily] Mail goes back to the hotel where 28 years ago, Harvey Proctor was found with an underage boy in his hotel room whilst on holiday in Morocco. Inside room 101, at what is now the Odyssey Park Hotel but was [then] the Ali Baba in Agadir, Morocco. This is the room where Proctor was found with the underage boy. The picture was taken with the permission of the hotel.”

The petition concludes with a request to “respectfully call on” Moroccan authorities to conduct an investigation in to the subject matter against the alleged rapist. 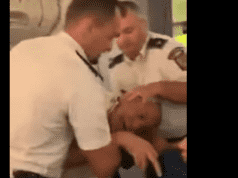