Rabat - A rare whale ran aground on Torres beach outside of Al Hoceima on March 13. The Association of Integrated Resource Management (Agir) is preparing to begin research to identify and confirm the whale’s species. 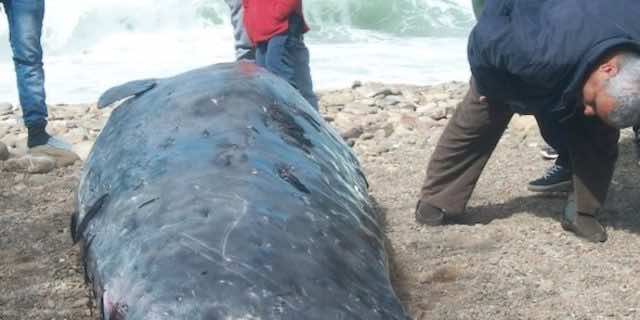 Rabat – A rare whale ran aground on Torres beach outside of Al Hoceima on March 13. The Association of Integrated Resource Management (Agir) is preparing to begin research to identify and confirm the whale’s species.

The whale is 5.2 meters long and weighs 700 kg. It manifests the characteristics of the spade-toothed whale species, which is a very little-known species and the rarest species of beaked whale.

“We are not 100 percent sure yet of the whale’s species, but we are going to dig into it, using genetic samples to start the analysis,” said Houssin Nibani, president of Agir.

The deep-water living species was first observed in New Zealand in 2012, when a whale and its calf washed up on shore.

“The spade-toothed whale rarely runs aground because they do not swim on surface water, and when they do, it’s because of the military, their boats pollute a lot and affects the brain of the whales and make them lose orientation,” added Nibani.

Once the analyses are completed, the association intends to extract the bones of the whale and frame the its skeleton on a metal structure to exhibit it in an ecological museum.

“This will allow us to have new reliable scientific data on this species, and we can also raise awareness and publicize this biodiversity to the public,” explained the president of Agir.

Since the 2000s, many cetaceans have been washed up on the Mediterranean coasts, including dolphins and whales. The Agir association, together with the Ministry of Maritime Fisheries, have been working with fishermen to protect cetaceans from “accidental fishing”, which carries them along the coasts. 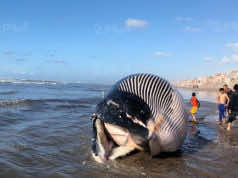