Rabat - Maalem Hamid El Kasri and Maalem Abdeslam Alikkane took to the stage for an evening of music and cultural exchange as part of the Gnaoua Festival Tour 2017.

Rabat – Maalem Hamid El Kasri and Maalem Abdeslam Alikkane took to the stage for an evening of music and cultural exchange as part of the Gnaoua Festival Tour 2017.

After making their American debut in New York on Thursday, the world-class musicians performed at Lincoln Centre in Washington on Sunday and delivered a show rich in Afro-Islamic rhythms.

“This tour, in Washington, after New York, and [then] Paris, means a lot to us,” said Naila Tazi, the tour’s producer and organizer of the annual Gnaoua and World Music Festival in Essaouira, in a speech kicking off the event.

Referring to the successes of the festival, which will celebrate its 20th anniversary this summer, Tazi said that it “was the beginning of a real adventure in Morocco, putting music at the center of some major changes in our society, and that made the demonstration that music can be [a] source of development.”

“It totally transformed the city of Essaouira,” she added. “And also because Gnawa [has] become a culture that we’re really proud of.”

Tazi delivered a brief history of Gnawa music to the audience. She described Gnawa musicians as “descendants of slaves who had been brought to Morocco from Sub-Saharan countries.” The music they brought with them fused with Moroccan forms and became Gnawa.

While Tazi pointed out the genre’s shared origins with blues, jazz, Cuban Santeria, Haitian Voodoo, and Brazillian Candomblé, she told the audience, “I’ll let you discover how universal this music is” by listening to the performances of Hamid El Kasri and Abdeslam Alikkane in their US debuts.

El Kasri’s deep, textured voice carried musicians and audience alike on a journey across the ocean and into the very heart of Morocco itself.

For young Gnawa musician, Samir LanGus, the concert was a labour of love that took months to bring to life. Based in New York, he has seen the genre grow into a veritable “Gnawa movement” over the years. For him, the performance is a way to share Morocco’s musical heritage in a way that brings music and culture together.

Judging by the applause Sunday evening, the audience was happy to have bought tickets for the journey. 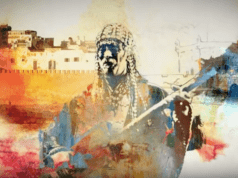 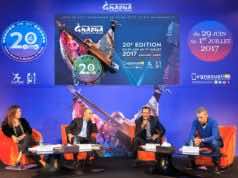 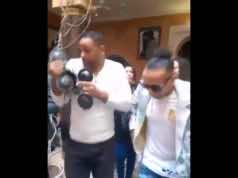