Toronto - David Rockefeller, aged 101, died peacefully in his sleep Monday at his home in Pocantico Hills, New York. Official cause of death has been listed as congestive heart failure. 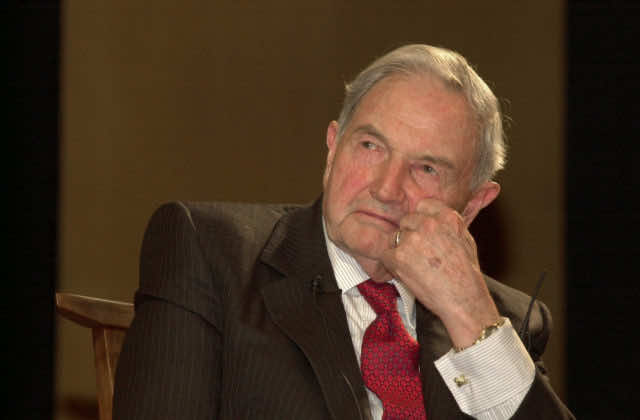 By
Constance Renton
-
Constance graduated from the Television and Radio Broadcasting Program at Canadore College in 1983.
Mar 21, 2017
Spread the love

Toronto – David Rockefeller, aged 101, died peacefully in his sleep Monday at his home in Pocantico Hills, New York. Official cause of death has been listed as congestive heart failure.

He is being remembered today by many as “one of the most influential figures in the history of American philanthropy and finance” and “America’s last great international business statesmen.”  The accolades are deserving.

Over a lifetime, Rockefeller donated in excess of $2 billion to a wide variety of institutions, from universities to the Museum of Modern Art, the Rockefeller Brothers Fund and the Council on Foreign Relations.

According to an October 2015 article in L’Economiste, David Rockefeller was the last living grandson of John D. Rockefeller, founder of Standard Oil Company. He retired in 1980, after 35 years of service at The Chase Manhattan Bank where he gained his reputation as the “banker’s banker.”

The same article listed Rockfeller’s 2015 personal net worth to be approximately $3 billion. The world was his oyster but there was one pearl he favoured above others; the Moroccan city of Fes. Not only did he love the city for its personal charms, he considered it to be “ideal for business meetings.”

He discovered the city in 1942 when he landed with the US Army in Casablanca. After that, regular shopping trips to Fes became a tradition he tried to impart to family members and friends. “I love purchasing craft items and walking through the medina,” he told L’Economiste. “It’s a great pleasure… On every trip, I bring my family, those close to me and my friends. It’s a rite I try to keep going.”