Rabat - Contrary to his party's previous categoric refusal to form a coalition with the Justice and Development Party (PJD), Ilyas El Omari, the Secretary General of the Authenticity and Modernity Party (PAM) set his foot in the PJD's headquarters on Tuesday afternoon to participate in newly-appointed Head of Government Saad Eddine Othmani's negotiations with party leaders. 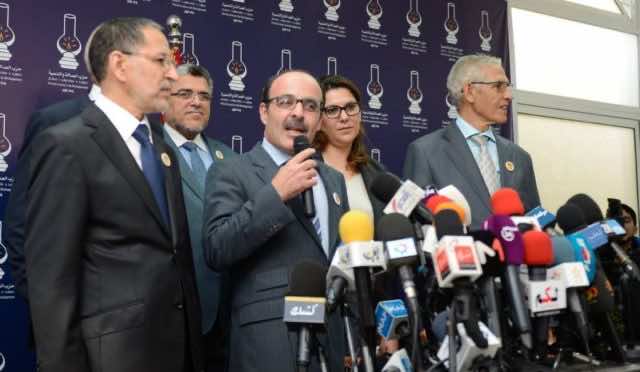 Rabat – Contrary to his party’s previous categoric refusal to form a coalition with the Justice and Development Party (PJD), Ilyas El Omari, the Secretary General of the Authenticity and Modernity Party (PAM) set his foot in the PJD’s headquarters on Tuesday afternoon to participate in newly-appointed Head of Government Saad Eddine Othmani’s negotiations with party leaders.

During a press conference held after the end of his meeting with Othmani, Omari praised his counterpart’s openness to other parties, regardless of their ideological orientations.

Omari, who was accompanied byFatima Zahra El Mansouri, President of PAM’s National Council, said that “the strategy of Othmani is good,” noting that he does not mean that the strategy of ousted appointed Head of Government, Abdelilah Benkirane was “bad.”

Seeking to add some levity during his talk, Omari said that during his meeting with Othmani, they drank tea and spoke in Tamazight.

Omari noted that “negotiations with Othmani remain at a standstill,” saying that the PAM still upholds the position that he voiced after the elections – to join the government opposition.

The PAM was the fiercest rival of the PJD in the latest elections, coming in the second position with 102 out of 395 seats in the parliament, behind the PJD’s 125.

On Tuesday morning, Othmani embarked on his negotiations with other party leaders  after King Mohammed VI set 15 days for him as a deadline to form a government coalition.

Othmani received Aziz Akhannouch, the Secretary General of the National Rally of Independents Party (RNI) and a delegation from the Istiqlal Party (PI).